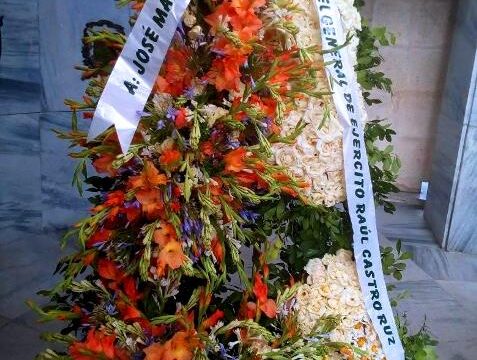 Photo and video
Author: Alejandra García
The mausoleum that honors the Apostle, Cuban’s national hero, José Martí, in Santiago, preserves the solemn silence of the scrub, in the hours following his death, on May 19, 1895. Today it is only interrupted by the chords of the elegy to José Martí, composed by Comandante de la Revolución Juan Almeida Bosque.

His remains are guarded tirelessly by an honor guard, with white flowers never missing and the Cuban flag resting on his tomb which is touched by the sun throughout the day.

This space, one of the most beloved in Santa Ifigenia Cemetery, at the foot of the Sierra Maestra, honors the life and work of the most universal of Cubans, in a silence that resembles that recounted by witnesses of his death, which historians and journalists have recalled for 125 years.

Only a few hours after Martí’s death, «Silence reigned.” It was as if everything had ended right there, as if the war would not continue,» wrote Cuban journalist Manuel Lagarde.

Martí arrived in Dos Rios only a few days before his death in battle. He reached the Mambi camp, after a long odyssey through the mountains. In spite of his small stature, he surprised his companions skillfully climbing steep paths, carrying his rifle and a backpack with a few belongings.

«Until today I have not felt like a man. I have lived in shame, and dragging the chain of my country, all my life.

The divine clarity of the soul lightens my body. This repose and well-being explain the constancy and joy with which men offer themselves to sacrifice,» he wrote his companions in a letter from the field.

He was not as weak as he thought. He was a living man, who jumped here and fell there. He showed the endurance of the tireless and saw more than anyone else.

It was as if he was the person one who saw, among the blind, Lagarde reported, recounting the testimony of Marcos del Rosario, a Dominican friend of Martí’s, who accompanied him during these days.

His companions in battle not only admired him for his strength, but also for hs sensitivity.

They reported that, when the group stopped along the way to Dos Rios, Martí spent his time writing. He would put two or three words on a blank sheet of paper, and look up at the mountains, and then add few more letters.

In spite of his own ailments, «He was attending the wounded until dawn, working incessantly on the organization of the new war, and maintaining correspondence with those abroad, all in his few hours of rest,» said researcher Roberto Pérez Rivero.

Cuba’s national hero died on the banks of the Contramaestre River, with the Spanish army’s bullets piercing the air over his head.

«The shots hit the Teacher’s body, the bright light bathed him, he released the reins of his horse, and his limp body fell to rest on the beloved Cuban soil.

Not a single cartridge was missing from his revolver, tied around his neck with a string,» wrote professor and historian Rolando Rodriguez, recalling that May 19.

The rifles shots were deafening in the scrub. Today, the solemn silence of these mountains prevails in his final resting place; but In hearts where Martí rests, he is reborn, with the vital force of his words, which moved Cubans to rise up for their country and bow their heads upon his death.