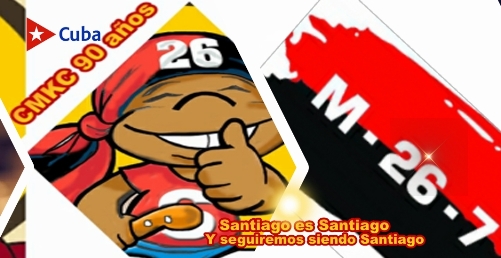 Through your streets and mountains hope of victory reigned. Here freedom took a stand and left ignominy behind forever.

Santiago, your history has earned you the title of heroic, and no word defines you better. You know well what it took to raise the Revolution from its foundations.

Many days, you wore red and your exceptional children became the upholders of Martí’s ideals.

You wept for those who gave their lives to the cause, you understood their hatred for the murderers who sought to dash their dreams, and never gave in. You were, are, and will be the fertile land where seeds of a better future grow.

On that 26th of July, more than six decades ago, you sealed your commitment to all the sacrifices to come.

Every bullet in the Moncada’s wall was a promise from you to be forever true to those who, with no other option, chose to give themselves body and soul to the battle for the dignity the country was demanding.

Witness to the horrors unleashed by the impotent who could never bend the will of the Cuban people, your tears made you stronger.

You knew that this was the beginning of the tyrants’ end, and took the path of that brilliant young lawyer and his companions in struggle and ideals.

Since then, for you every day is the 26th. You have grown with the untiring work that dignified you and the entire nation, grateful for your dedication, appreciative of your hospitality and willingness to give your all, if necessary, to ensure that the most beautiful of flags, that of the solitary star, may wave with the grace that only freedom can grant.