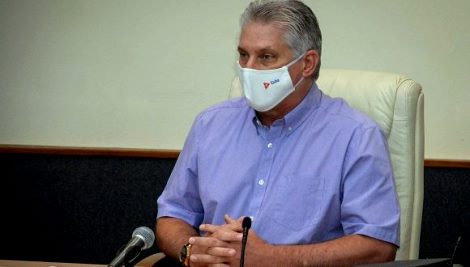 Author: Leticia Martínez
CMKC, Radio Revolution.- A few hours before Havana entered the first phase of recovery and the rest of Cuba, with the exception of Matanzas, entered the second phase, yesterday July 2, President Miguel Díaz-Canel Bermúdez emphasized, “Science continues to confirm that there can be no overconfidence in the battle against COVID-19.”

In another encouraging meeting at Revolution Palace with scientists and experts, which have become a regular point on the government’s agenda every Thursday, with Prime Minister Manuel Marrero Cruz participating as well, the President insisted that discipline and control must be maintained throughout the recovery period.

Referring to the benefits of these frequent dialogues with Cuba’s scientific community, Diaz-Canel noted that every week new findings are reported and this Thursday was no exception. The agenda included reports on research in various fields: demographics, mathematics, biotechnology, etc.

María Guadalupe Guzmán Tirado, director of Research, Diagnosis and Reference at the Pedro Kourí Institute of Tropical Medicine (IPK), presented the results of a study on patients with persistent positivity for SARS-COV-2.

This research has confirmed that, in more than 200 patients admitted to the IPK, the highest levels of the virus were detected in the first three days of infection, but that the pathogen can remain present for more than a month.

Thus, this study confirms the importance of keeping patients hospitalized as long as their PCR test remains positive, since such patients can continue to infect others, she noted.

From the Cuba’s Center for Advanced Studies, General Director Angelina Díaz García, explained another important study of nasopharyngeal samples using high-resolution microscopy, which has made it possible to observe the virus and its destructive impact on pharyngeal and nasal epithelial cells with total clarity. That is why, she noted, some patients report a total or partial loss of their sense of smell.

Where the virus replicates most, she stated, is in the nostrils, thus the need to ensure risk perception and use facemasks as prescribed, covering the mouth and especially the nose.

As usual in these gatherings, Raúl Guinovart Díaz, dean of the University of Havana’s department of Mathematics and Computing, presented the well-known curve graphs depicting the evolution of active cases in Cuba, emphasizing that it would be a mistake for the population to think that in the recovery stage no preventative measures are needed, adding that special attention should be paid to crowded closed spaces, where outbreaks can occur.