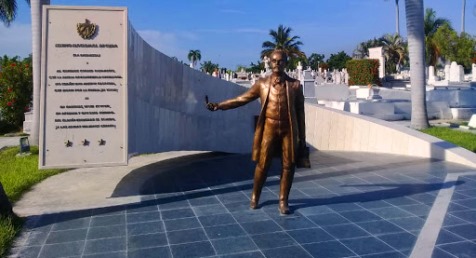 Sick and his feet full of bleeding sores, the author of the National Anthem was led on a donkey to the gallows on the morning of August 17, 1870, almost two years after the start of the insurrection led by Carlos Manuel de Céspedes, Father of the Nation.

But who was Perucho Figueredo?

Lawyer by profession, from Bayamo and owner of a sugar mill (like Céspedes) Perucho Figueredo was one of the most influential figures in the eastern city of Bayamo, one of those who contributed more men and sacrifice to the cause of independence in the Ten-Year War (1868-1878).

Since we were children, we imagine Perucho riding his horse writing the lyrics of La Bayamesa, which later became the National Anthem of Cuba.

It is unlikely that this was actually the case, as the melody and the lyrics fit together almost perfectly, leading many musicians to believe that the two emerged in unison.

The music aroused the suspicions of the Spanish governor of Bayamo, Colonel Julián Udaeta, who once concluded the premiere of the hymn, questioned the musician, who warned by Perucho, declared himself a simple performer and referred him to the author.

The historian José Maceo Verdecia, in his book Bayamo, said Figueredo completed the dialogue with the soldier thus: ‘I understand that you know nothing about music. What leads you to say this is a patriotic hymn?’

The piece had its premiere on June 11, 1868, although it was composed in August 1867 by order of the Revolutionary Committee of the town (in which the conspirators against the colonialist power were grouped).

That day was the Corpus Christi festivity, a celebration of the liturgical calendar in which the full City Council, the Army and the people usually participated, overflowing the Parroquial Mayor.

Shortly before the procession with which the festival ended, La Bayamesa was sun for the first time in public.

Less well known is that Figueredo held the rank of lieutenant general (brigadier) and was in 1870 Chief of the General Staff of the Liberation Army. Therefore, one of the most sought after by the Spanish colonialists.

The colonialist press of the time asserted that the revolutionary was captured in a hut near the city of Santiago de Cuba. He was ill with worn clothes and in a deplorable hygienic state.

However, it recognized in the prisoner distinguished features, high and wide forehead, aquiline nose, penetrating and intelligent gaze, and tall stature.

Faced with the impossibility of walking to the place of the shooting, Figueredo asked for a car, but the Spanish chief who was driving it considered such a request too honorable for a mambí (a derogatory term that became the pride of the combatants almost from the beginning of the fight).

‘It will not be the first redeemer who rides on a donkey (the animal that was brought for him to move in)’, Figueredo responded, according to the version of the independence newspaper El Demócrata, which was published in New York, and based on the writings of the Spanish press in Cuba.

At the end of his life, Perucho Figueredo was a very sick man who a little humanity from his captors would have avoided the scaffold.

But he was very guilty for writing that hymn: To combat run, Baymese, / that the homeland contemplates you proud. / Do not fear a glorious death, / that dying for the homeland is living …