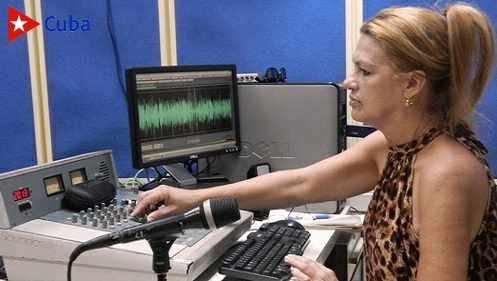 Text and photo: Santiago Romero Chang
CMKC was always present, both in the ruthless imperialist attacks against Cuba: Bay of Pigs, the fight against bandits, etc..

CMKC- As well as in the hard years of the reconstruction of the nation, in the main economic and political tasks: Literacy Campaign, the 10 Million Sugar Cane Harvest, the Voluntary Work Days in the construction of the first works such as the extension of the Las Americas Avenue, the Versalles and the New Vista Alegre neighborhoods, the remodeling of the Antonio Maceo airport, the coffee harvest, the mobilizations for the defense  during strong hurricanes such as Flora, etc….

For several years the Santiago de Cuba Provincial Radio Headquarters operated in the building of CMKC until the new political division in 1976, when the nine municipalities of the province of Santiago de Cuba appeared. It was located in the house where the Mambi General Jose Maria Rodriguez, aka Mayia, used to live, at 510 Aguilera Street, between Reloj and Clarín, across from the biggest cinema of the Cuban east.

Mayia was born in this city on June 13, 1849 in the bosom of a Santiago family of long Catholic tradition, under the guidance of two family priests: his great uncle Francisco, and his grandfather Jose Maria Rodriguez Rivera, who became a domiciliary priest of the Archbishopric of Santiago de Cuba.

The radio tradition in eastern Cuba boomed with the triumph of the Revolution, this important means of communication did not escape the wave of transformations in which many of the radio stations were intervened and put at the service of the people. In 1968 Radio Siboney went on the air, a radio station of light popular instrumental music, the only one of its kind outside the capital. Its predecessor, Radio Valpín, also transmitted commercial advertising on FM.

As from the Political Administrative Division, the concepts of local community and participatory radio began to open up, based on the need for the radio message to respond more to the socio-political, geographical and economic environment of each municipality.

For this reason, on March 11, 1978, the rebel radio station of the Second Front, Radio 8SF, was rescued in Mayarí Arriba, in the heart of the Sierra Cristal. CMKC also had to readjust in 1980 to its provincial limits, both in terms of content and programming design, since its transmitters were put at the service of the emerging radio networks.

The comprehensive adjustments of radio programming continued in the province in the face of new and increasingly aggressive actions of U.S. imperialism. Radio Majaguabo, in San Luis, on July 5, 1982 and Radio Grito de Baire, in Contramaestre, on February 24, 1990, both with 8 hours of transmission, appeared on the air.

Based on the Havana experience, Municipal Radio Booths were created here in the ’90s, centers that played an essential role in the mobilization, organization and public agitation, even in the so-called zones of silence in the middle of the mountains.

These booths started the chain with CMKC, both in direct telephone line and microwave system, and received their first journalists as founders-advisors such as: Juan Alberto Trujillo, Onel Caparros, Esteban Revilla, Santiago Romero, Orlando Ocaña, Orlando González, Benigno Rodríguez, in short, a first wave that fostered and gave the first advances in community radio.

These new radio stations work between 4 and 6 hours of transmission with a mainly informative, recreational and social facilitation profile.

«CMKC, always by your side!»

Currently the Radio in Santiago has digital technology and the integration of 11 radio stations, ten of them respond to the precepts of community and local radio, one transmits light instrumental music and as a reflection of the provincial work the flagship station of the province: CMKC Radio Revolucion. It is the parent station of the Radio Network in this southeastern region, some 969 kilometers from the capital.

The 24-hour programming includes productions for different audiences: children, youth, adults, housewives, intellectuals, peasants, simple workers, artists, in short, in search of the confirmation of our identity slogan: «CMKC, always by your side”