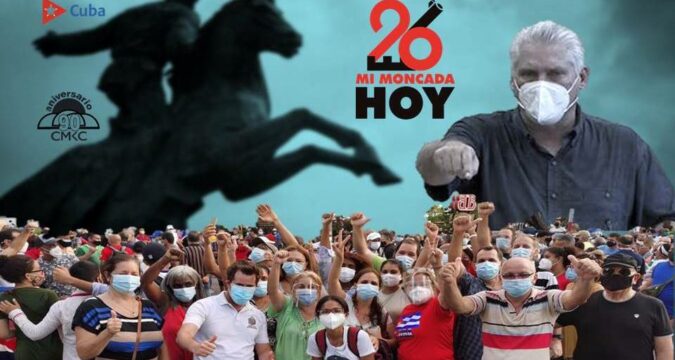 Love- Whoever wants to see how Cuba is, how life is lived in Cuba, how every day this people build pages of heroism, how this people in the midst of the circumstances has faced the pandemic, how a government is committed every day to work with the issues that most affect the population, will be able to see how different is the world we are betting on and the world we want to build.

Love, Not Hate, Not Violence- The motivations that move the efforts of Cuba in Revolution destroys all the perversity of the plans of the empire, of the plans of the Cuban-American mafia that is determined to prevent the revival of a dialogue of respect, of equals, without restrictive measures, without coercive measures between two countries that are very different ideologically, but that are geographically close and that could have a totally civilized relationship, on the basis of mutual respect. Those I underline “are the arguments, the convictions that we must continue to defend, and for which we must continue to show our firmness and our truths.

Love, Not Hate, Not Violence, Not Vandalism- The enemies of the Revolution are trying to complicate us in two scenarios: the first has to do with the COVID-19 and the bet that «it will continue to complicate and that we will not have the capacity to successfully face the pandemic», something to which, mind you, we have to continue intensifying the measures, we have to continue strengthening the protocols, the demands, the way of doing and, above all, of ensuring the vaccination.

The other objective that the enemy is betting on is to create social unrest, uncertainty. The campaign in the social networks is an irritating campaign, totally lying, slanderous».

In other words, this discourse that the government is repressing peaceful demonstrations, or this request that Cuba or the government respect the opinion of its citizens is a total lie and a total slander. Those who are demonstrating are not demonstrating peacefully. They are called by the hatred that has been instilled in them by all that strategy of subversion so outrageously mounted, so perverse, so evil, that has been mounted in the social networks.

It is media terrorism, therefore, someday we will be arguing before the world as well, we will be denouncing that those who have joined these campaigns at this moment did it by supporting terrorism.

If anyone should be on a list of terrorists, or of countries that support terrorism, it would be all those who have supported the empire’s maneuvers. Therefore, we have to be very calm, patient and serene.

Let us not allow ourselves to be intoxicated by the social networks, because what they are trying to build is a reality that is not the one we are living. They have constructed the reality of a disordered, ungovernable Cuba, which is going from one explosion to the next; and they have been so cynical, such liars, they are so weak-minded, that they cannot put forward a serious argument, that they have ridiculously resorted to posting revolutionary Cuban photos, arguments and information to illustrate their charade.

They have taken a photo of Egypt, of a demonstration in Egypt, to say that it is a demonstration on the Havana seawall. They took the celebrations in Argentina as part of the triumph of the soccer cup, with which Cuba is also happy, and they have also put it as demonstrations (in Cuba). It is so ridiculous… but that intoxicates, and the worst thing is that we have people who are so imbued with that and are assuming that information. Therefore, I believe that we have to be very coherent, we have to continue denouncing what is happening in the social networks, and not let ourselves be intoxicated.

Love, Not Hate, Not Violence, Not Vandalism

We are giving the transparent information of what is happening, and also the information, very transparent, of what is not happening and what they want to happen. Because in all this set-up, what are they trying to encourage? They are trying to encourage that there is no tranquility among the citizens. They know that this is one of the patrimonies of the Revolution, this is one of the things that a foreigner appreciates the most when he comes to Cuba, a tourist, the diplomats who visit us, the people who visit our country, and it is also a conquest of our people, it is the way we live, without any expression of hatred.

I warn about the purpose of those who are perpetrating media terrorism. They are trying to create a scenario in which there will be guarimbas (that is how the riots are known in Venezuela), stonings, barricades and all these phenomena that they have tried to set up in other countries, and that as has been explained, is part of the famous manual by which the soft coups and their different phases are conducted.

Defending Our Conquests at Whatever Cost

This is how they do it, to then say that there is no governability, and they have the pretexts, as gendarmes of the world, to then offer the channels of humanitarian aid, the humanitarian corridors, and that we have to assume it with all the decisive, firm confrontation, of convictions, as we are doing, and where we have already counted on the support of the majority of our people. Therefore, we cannot lower our guard. Let us not be misled by the current calm.

Are we the violent ones? Are we the repressors? We are not acting against anyone; we are simply, with the people, defending the rights of the people. And anywhere in the world, when there are acts of delinquency, are they not repressed? Here there is a difference: here these provocations are confronted by the people, and of course by the institutional organizations.

We have to continue working to delinquency, the vestiges we may have of indecent behavior; we have to continue advancing with our social programs, which are also very much affected by the economic-financial situation, but we have all the political will to work with that, but we cannot lower our guard: we have to continue increasing the protection measures that guarantee the tranquility of the citizens, we have to continue strengthening or reactivating the guard of the Committees for the Defense of the Revolution, the workers’ guard and the administrative guard.

Wherever there is revolutionary vigilance there will be no room for provocations, or for counterrevolutionary propaganda, or for vandalism. And sometimes we have to act in the face of this aggressiveness, we have to act strongly, but always avoiding to damage human lives.