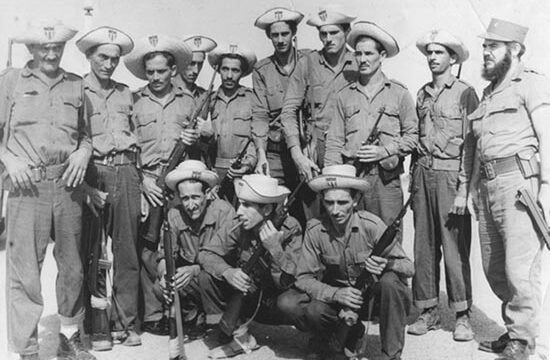 Fight Against Bandits: Every year, October 18th is dedicated to celebrate in our country as the Day of the Combatant in the Fight Against Bandits, in recognition of Los Malagones, those legendary peasants from Pinar del Río, who on that date in 1959, following the orders of our Commander in Chief Fidel Castro, captured in record time the terrorist band of rebels led by Luis Lara Crespo, El Cabo (The Corporal), a henchman who at the service of the Batista dictatorship had committed numerous crimes. The experience of these twelve peasants commanded by Leandro Rodríguez Malagon, was later used in the training of militia patrols and in the persecution of other bandits throughout the national territory.

On this occasion we also pay tribute to the thousands of men and women who demonstrated that it was possible to give arms to the people, to organize them in units of workers and peasants militias, in mountain companies and in battalions of the Fight Against Bandits led by chiefs and officers of our Revolutionary Armed Forces, who knew how to pursue the insurgents in very-well known intricate territories and where they had the support of family and friends.

In the summer of 1960, when the Central Intelligence Agency began to foment the first armed uprisings in the Escambray mountains, our Revolutionary Armed Forces carried out a massive popular mobilization to combat the enemy.

The bandits burned down rural schools built by the Revolution and carried out numerous sabotages against local means of transportation and agricultural targets. They then fled to avoid frontal confrontation with the revolutionary forces while awaiting U.S. military intervention.

Under the command of prestigious chiefs and officers of the Rebel Army, who at all times had the support of the vast majority of the inhabitants of the rural areas, the bandits were pursued by means of sieges, interceptions, and ambushes, which captured them in different circumstances, but at the cost of the lives of many combatants.

According to subsequent historical investigations, about 618 combatants and militiamen fell during the pursuit of the rebels, in the sieges and chases. They died in different circumstances related to the military operations, or died as a result of wounds received.

In addition, some 196 people were killed by the gangs, including 15 children, 8 elderly people and 2 women. As a result of the terrorist acts of the gangs among the population, some 75 people were also reported to have been wounded of varying degrees of severity.

Some 635 rebels were killed during the persecution by the revolutionary forces and at least 18 rebels were killed by their own buddies as a result of internal conflicts. It is likely that some of these elements whose deaths were not reported are still buried in intricate rural areas.

We estimate that some 1,467 Cubans lost their lives in a war fomented by the U.S. Government, which was not interested in casualties on either side. The approximate cost of the confrontation with armed banditry, according to the calculations of the time, was one billion pesos.

The captured bandits were submitted to the Revolutionary Tribunals with all the procedural guarantees, where they had to answer for their crimes. Those who committed crimes were sentenced to death by firing squad; others received different sentences according to the crimes committed. After serving their sentences, many of the rebels decided to emigrate, but others were reincorporated into our society and enjoyed their duties and rights as any other citizen without anyone bothering them.

For several years, some fugitive bandits who had chosen to hide in various hideouts and live isolated from any contact with society, surrendered, but since none of them were proven to have participated in crimes, they were released because they were considered to have submitted themselves to harsher privations than those imposed by the revolutionary laws.

Fight Against Bandits: Another Lesson to Cuba’s Enemies

Banditry had been defeated throughout the national territory, although some bandits remained dispersed and without any belligerence. Some went into wooded areas to avoid being captured, but others tried to go to the capital with the purpose of entering an embassy, obtaining safe conduct to emigrate.