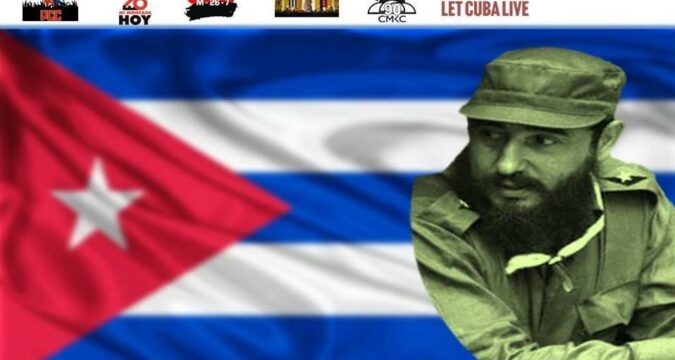 When Fidel Castro stood on the back of that amphibious jeep, which in the middle of the flood looked more like a floating leaf than a military vehicle, what he really thought he had before his eyes was the Amazon River itself, rushing into the Gulf of Guacanayabo

When Fidel Castro stood on the back of that amphibious jeep, which in the middle of the flood looked more like a floating leaf than a military vehicle, what he really thought he had before his eyes was the Amazon River itself, rushing into the Gulf of Guacanayabo.

Hurricane Flora had made a loop over the current provinces of Las Tunas, Granma, Holguín and Camagüey, following an erratic path and delivering heavy rain, more devastating than the winds, which swallowed the broad Cauto River Plain and, with it, the lives of some 2,000 persons; destroying 4,000 caballerias of rice, thousands of homes, and the road infrastructure of an entire region.

Even Valentina Tereshkova, the world’s first female cosmonaut, coincidentally visiting Cuba, offered to help in the rescue of the inundated population, a task led by Fidel himself, who mobilized the country’s most experienced pilots and ordered the impossible, to save the humble residents, like those of Pinalito, who worked part of the year in the sugar cane harvest and the other part picking coffee.

The story goes that, with his legendary long view always under consideration, before the battle against Flora’s waters had ended, Fidel sent for Comandante Faustino Perez, and right there, on the hood of an olive green jeep with a map stretched out between them, many ideas emerged about what would later become Cuba’s huge water distribution and flood control program, which would became a sort of obsession for Fidel.

Based on the experience and the suffering he witnessed on the Cauto River Plain, when our helicopter pilots violated all the rules of air navigation to rescue those waving from the roofs of their huts, the Comandante also understood the importance of having a Civil Defense system that would make it possible to foresee and plan a response well in advance, so that the protection of human lives and material resources would not be at the mercy of improvisation.

It cannot be categorically stated that the country’s water program and the Civil Defense system are the exclusive offspring of Flora’s waters – both projects continued to be enriched with new experiences and ongoing work – but Fidel himself acknowledged more than once that that hurricane, considered one of the worse catastrophes ever to hit the country, marked a before and after in Cuba’s response to the demands of nature.

This episode in October of 1963 was not unique; for more than half a century, Fidel taught us to anticipate events and, at the same time, find creative, lasting solutions in the face of the most challenging obstacles, a skill he had cultivated since the times of the Sierra Maestra.

Che Guevara and several analysts have described him as a creative leader, the guerrilla who, faced with a siege mounted by a far superior enemy, learned to defend himself by attacking, never sleeping two nights in the same location, to deny his adversaries any clues as to the guerillas’ whereabouts, to combine the fight in the mountains with resistance in the cities, to open new fronts when the time came to expand the war, and use every human and material resource where most needed.

With this same philosophy, he charted the country’s path, fought international battles, won the admiration of the Third World and progressive forces of the planet, and faced the most difficult circumstances as head of state, from a mercenary invasion and a nuclear crisis, to more than 600 assassination attempts, the collapse of the socialist camp and the disintegration of the Soviet Union.

When the historical enemies of the Revolution attempted to disrupt a supremely humane effort like our Literacy Campaign, Fidel created militias that combed the Escambray; when U.S. companies refused to process Soviet oil, he nationalized all the existing refineries in the country, and years later, when enemy agents introduced hemorrhagic dengue fever on the island, he directed a forceful health crusade with specific pediatric treatments, the direct antecedent of the intensive care system that exists today in all provinces.

Fidel taught us not to respond with lukewarm efforts, hesitation or bandaids, but with decisions in line with the magnitude of the moment, often measured, as politically necessary. «Cuba is against terrorism and against war,» he replied to Bush Jr. in that historic proclamation, and also often radical, as in the case of returning hijackers of airliners, the only solution to the crisis created in flights between Cuba and the United States, or the decision to take to the streets of Havana in the midst of the violent events of August 5, 1994.

In the face of the dogmatism expressed in other socialist countries, Fidel created our People’s Power, an innovative system of participation that begins and ends with the people. In the face of attempts to violate our radio-electric space, he raised an «iron curtain» against so-called Radio and Television Martí broadcasts, and in the face of the proclamation of the «end of history,» the proliferation of neo-liberal lies, ideological hogwash, bad taste and globalized indecency, he called on us to form a comprehensive general culture that would save us from all these sins, perhaps the most urgent debt we owe today to his memory.

The image of that group of university students, in the mid 1980’s, preparing an omelet for a snack at the bottom of the trench they were digging, at two in the morning, on Quintero Hill, in Santiago de Cuba, could seem more an episode of magical realism than a concrete contribution to the defense of the country, at a time when the socialist camp and the Soviet Union still appeared invulnerable.

In Cuba, however, two people – Fidel and Raul – knew that, given a possible military intervention in Cuba by the U.S. government, with President Ronald Reagan in office (1981-1989), the Soviet Union would surely express its displeasure, protest vigorously at the UN, but would not get directly involved in an armed conflict thousands of kilometers away from its territory.

Fidel, who by then was already cured of any fear – he had disagreed with the Soviets in their political management of the Missile Crisis and also in the military conception of the Angola campaign – then opted for the doctrine of the War of the Entire People, a plan that broke with traditional defensive strategy and assigned a concrete mission to the millions of Cubans who were willing and ready to defend their Revolution.

The worse was yet to come. Years later he witnessed the disintegration of the Eastern European socialist bloc (1989), what he called the «whipping» of the USSR (1991), a blow that seemed mortal for Cuba, which in less than 18 months lost 35% of its Gross Domestic Product.

By then, as today, opportunism and hatred against the Revolution became the order of the day; the U.S. Congress signed the controversial Torricelli Act (1992), another turn of the screw in escalation of the blockade – not the first or the last. In Miami, there were more than a few packing their bags to retake the island, and one rabid spokesman, one of those that always abound in South Florida, Agustin Tamargo, requested three days off work to kill in Cuba.

Expert in the art of counterattack, Fidel dismissed proposals to surrender, even from some «friends,» and trusted once again in the resilience of Cubans to come out on top even in the most adverse circumstances.

The result of that series of attacks was the strengthening of the country’s tourism infrastructure, with extensions to the virgin keys that surround the big island, and new concepts in the commercialization of our product; the development of the biotechnology industry- the pride of a poor and underdeveloped nation of the South – and the export of services, a strength that is based on the human capital developed over the course of 60 years.

This is precisely the same «creative resistance» to which Party First Secretary and President Miguel Diaz-Canel is calling Cubans, to move the country forward, in a flood perhaps as complicated as that of October 1963, when Fidel believed that the Amazon was flowing through the Cauto basin.