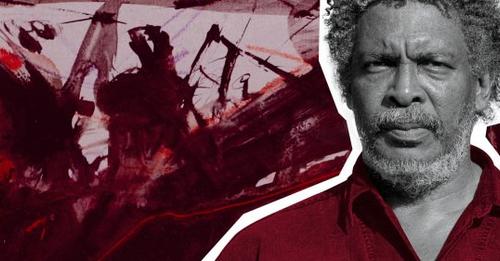 Lescay has made several personal exhibitions and has participated in multiple group exhibitions in Cuba and other countries where he has obtained numerous and important awards and recognitions, which give his work a high esteem in the contemporary Cuban and universal plastic arts.

Painter and sculptor, fundamentally, he has worked the different techniques in these manifestations and has appeared in collective and individual exhibitions throughout Cuba and the world. Sculpture has been one of the manifestations in which he has worked with greater achievements throughout his career; one of the best known is the statue of Maceo, located in the Revolution Square in Santiago, and which had been conceived as a project by the architect Antonio Quintana Simonetti, who made the preliminary scheme of the Antonio Maceo Square in 1985.

With the execution of the sculpture of Maceo, he and a group of sculptors began the experience of the Caguayo Foundation in 1995, which currently leads events on sculpture in Las Tunas, Camagüey, Santiago de Cuba and Havana; besides being linked to other associations such as CODEMA -the Advisory Council for the Development of Monumental and Environmental Sculpture- which sponsors the René Valdez Cedeño International Sculpture Symposium in Santiago de Cuba.

One of the distinguishing conceptual elements of Lescay is the use of history in the theme of his works, as well as the indirect or direct reference to the Latin American ideology that has permeated both his sculptural and plastic works.

His painting is currently characterized by postmodernism in which abstract elements stand out in the backgrounds and the overlapping of brushstrokes, as a counterpart to the figuration that the tradition of drawing left by the Repin Academy marked his formative period. He also cultivates mural painting, employs inks, rice paper as in his exhibition Somos from December 17 to 21, 2015 during the Jazz Plaza festival, among other materials. He has also participated in the editions of the International Meeting of Mural Painting, which takes place in Santiago de Cuba.

He has cultivated small-format sculpture, more traditional statuary and monumental sculpture, although installations and sculptural installation are part of the more contemporary language he has used in his latest exhibitions and shows; such as the Somos Project founded in 2014 from an exhibition during the Romerías de mayo (May Processions) in the city of Holguin. The representative sculptures are numerous, the Che of the Ministry of Foreign Affairs of Cuba; the women of his statuary Monument Rosa La Bayamesa, 2001; and the Marti, less academic and more abstract.

His sculptures are placed in the Prado de las Esculturas in Santiago’s Baconao Park, the nation’s largest open-air collection, which emerged from the International Symposium of Environmental Sculpture in March 1988 from the initiative of monumental sculptor Augusto Rivero. The pieces include Frida, by Mexican Manuel de Jesus, the Roots by Jorge Arango, the Portico by Ricardo Amaya and one by Caridad Ramos.

Creates and presides over the Caguayo Foundation for the Monumental and Applied Arts, Cuba. 1995

Presides over the «Hermanos Saiz» Brigade of Writers and Artists of Santiago de Cuba and is a member of its National Council. 1981 /85

Delegate to the 12th World Festival of Youth and Students. Moscow, Russia. 1985

Co-founder of the Youth Column of Writers and Artists of the East, Cuba. 1965

Mention National Contest for the Monument to Che and the children. Lenin Park. Havana. Cuba.

Prize in the Competition for the Project of the Antonio Maceo Revolution Square of Santiago de Cuba. Monument to Antonio Maceo. (Leads Multidisciplinary Team)

Award in Environmental Sculpture Contest. He makes the Totem Sculpture located in the exterior area of the Center of Architecture Projects (EMPROY 15), Santiago de Cuba.

Prize in the International Contest for the Pictorial Mural on Peace in the 12th World Festival of Youth and Students. Moscow.

April Award. For the Sculpture of Julio Antonio Mella. Awarded by the Young Communist League (UJC in Spanish).

1994. Replica of Machete of Generalissimo Maximo Gomez by the Minister of the Revolutionary Armed Forces of Cuba.

1996. Juan Marinello Order. Awarded by the Council of State.

2000. Jose Maria Heredia Plaque. Awarded by the Provincial Board of Culture.

Works placed in Cuba and abroad

1985. Mural on Peace. House of the Union of Painters. Moscow.

Dynamics of the Atom Mural (Ceramic and Stainless Steel). Facade of the Institute of Medical Biophysics. University of Oriente, Santiago de Cuba.