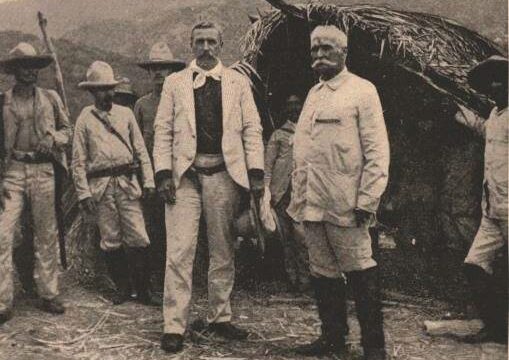 Translater: Guillermo Rodriguez Cortes.
In the 1880s, a small hermitage was built under the patronage of San Marcelino, whose patron saint festivities were celebrated every April 6 with similar characteristics to those of Baire San Bartola.

By references of the oldest families of the town, like the Urbinas and the Tabares, it was recognized that the referred hermitage was destroyed during the War of Independence of 1895. Nevertheless, the tradition of celebrating San Marcelino was maintained, but its character was no longer religious, but of popular entertainment, being celebrated then on January 2, as a continuity of the celebration of the new year.

At the beginning of the decade of the 60s of the 19th century, Baire continued being a second class party of the jurisdiction of Jiguani, with a territorial extension of more than 199 980 acres, which comprised more than the southern half of the jurisdiction, with extensive and fertile plains towards the north. By 1867, the Colony-Metropolis contradiction had reached its highest point of aggravation.

The fundamental causes of economic, political and social nature for the outbreak of the war were masterfully defined by Commander in Chief Fidel Castro when he expressed: «In the jurisdictions of Bayamo, Manzanillo, Las Tunas, Holguin, Jiguani and Baire is precisely where the war for independence begins, the slave population barely reached 6% of the total and the number of modest independent peasants was high, therefore, the leaders of the Cuban sectors were less permeated by those fears that paralyzed the Cubans in the western region of the country.»

Three days after the uprising in La Demajagua, on October 13th  1868, forces of Donato Marmol coming from the Santa Teresa farm, with 100 men dressed and mounted, went towards the settlement of Santa Rita and finally diverted their trajectory towards the village of Jiguaní, head of the jurisdiction, which they attacked and took without great difficulties.

Jiguaní thus became the first free town of Cuba in the wars of independence. After liberating this town, Donato Marmol named Calixto Garcia as military chief there. Marmol then continued the towards the party of Baire,  and took it in the noon hours.

In Baire, Donato Mármol was joined by 100 more men, Florencio Salcedo, Mariano Torres, Carlos Suarez and Donato Infante outstood among them. Thus Baire became the second free town of Cuba during the war of 1868.

During the so-called stage of the consumer economy between 1700 and 1792, there was a small community called Baire Arriba, whose fundamental production was dedicated to supply the needs of its reduced inhabitants, essentially with the sale of some products to cover their needs The fundamental work force consisted of agricultural workers and tobacco growers of modest position; a fact that explains the lack of slaves at this stage. This is precisely the time when the town of Baire was founded.

At this stage in the territory there were 12 small sugar mills with Jamaican trains moved by animal power, 47 pasture farms, 1,250 farms to work and excellent tobacco plantations; for a total of 5 132 cultivable acres, some of which were dedicated to the cultivation of sugar cane. This stage was characterized, fundamentally, by the existence of large plantations throughout the country that required slave labor. However, in this territory it is only possible to speak of small productions in the hands of agricultural workers, independent peasants, tobacco growers and an insignificant number of essentially domestic slaves. Due to the importance of these productions for the economic development of the territory, a brief reference is made to each of them.

It was located mainly in the areas of Los Negros, La Torcaza and La Güira. As of the nineties of the 18th century, the labor force consisted of agricultural workers and a minority of slaves.

Pig, goat, sheep and poultry farming was dedicated to the self-consumption of the population of the main district, which was Baire and small surrounding neighborhoods at that time, such as Maffo, Los Negros, Ventas de Casanovas and Remanganagua: Maffo, Los Negros, Ventas de Casanovas as well as other rural areas. Regarding the economic aspect, the distribution of the rural population of Baire in 1846 was based on 10 sugar mills with 3.8% of the rural population living in them. At the beginning of 1859 the population consisted of 247 whites, 123 free of color and 49 slaves for a total of 419 inhabitants.

In relation to this stage other data of socioeconomic interest is offered in the statistical table published in 1847, where 11 houses of masonry, 2 of wood and tiles and 42 of mud and guano are consigned in Baire, the population: 342 white individuals, 109 free of color and 3 slaves.

There were also workshops, blacksmiths, shoemakers, mixed stores, bakeries, carpentries, butcher shops, tailors, saddleries and tobacco shops. In the eastern region, the concentration of slaves was located in Santiago de Cuba and Guantánamo. However, in Bayamo, Jiguaní, Baire and nearby jurisdictions the number of slaves was small, while independent peasants were in the majority.