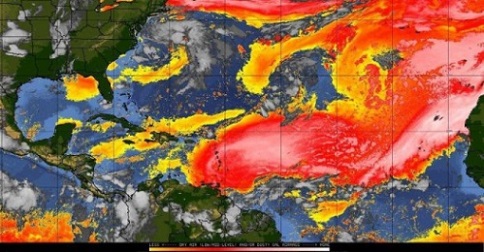 CMKC, Radio Revolucion.- A large cloud of Saharan dust is darkening the skies of the Caribbean, Puerto Rico and the Dominican Republic, and it has already reached the eastern part of Cuba.

Dust clouds from Western Sahara impact on the Caribbean. Notice the perfect yellow solar ring in the center, an optical effect produced by the mineral content of the dust cloud over Santiago de Cuba (17:00 h, June 23, 2020)

Every year, especially during the second two weeks of June and the month of July, the Saharan dust moves from Africa over the Atlantic Ocean and reaches the Caribbean and the southeast of the United States.

It comes with very dry air and it thus inhibits rains and the growth of tropical storms in this time in the mid-Atlantic.

The dust particles are so small that around 30 particles set one next to the other fit in a thread of human hair. However, what characterizes the most the current event is the high concentration of dust particles.

Dr. Olga Mayol, from the University of Puerto Rico, one of the islands most affected by the phenomenon, believes that this is the most important event in the past 50-60 years. In Cuba, the largest concentrations, according to global models, are found in the eastern part of the country between June 23-24, and it will move to the central and western region on 24-25.

The concentration values are very high. The Saharan Air Layer provokes whitish skies, rain reduction and temperature increase as well as thermal sensation that occurs for the solar radiation allowed by the dust, though in a diffuse manner.

Short solar radiation waves are absorbed by the earth surface and bounce back upwards as infrared radiation in long waves.

It is a real local greenhouse effect. Nevertheless, there are other effects to be taken into account.

Dust is an atmospheric contaminant and in large concentrations it reaches the air we breathe.

It can worsen the health of humans with respiratory problems, therefore they should take extreme measures, for it may produce coughing, sore throat, and red crying itching eyes.