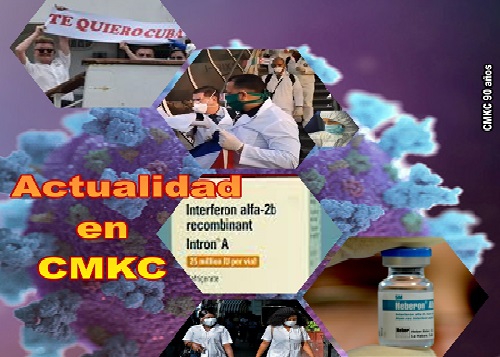 Author: Orfilio Peláez
Since the appearance, March 11, of the first cases of COVID-19 in Cuba, the country’s Ministry of Public Health (Minsap) has reported that the inclusion of Recombinant Human Interferon Alpha 2b in treatment protocols for these patients has shown positive results.

Details on the effectiveness of the product were presented by Dr. Eulogio Pimentel Vázquez, director of the Center for Genetic Engineering and Biotechnology (CIGB), affiliated with the BioCubaFarma Enterprise Group, where the medication was first produced in the late 1980s.

«The strength of the Cuban health system, and its close ties with the biotechnology and pharmaceutical industries, in our social system that prioritizes the people’s health, makes possible the medication’s availability for all Cubans.»

According to Dr. Pimentel, in accordance with the Minsap treatment protocol, this product, in combination with other drugs, is used as soon as a case is confirmed, and not with patients in serious or critical condition.

Data released April 14 shows that 93.4% of patients testing positive for SARS-COV-2 had been treated with Heberon (the commercial name of Recombinant Human Interferon Alpha 2b). Only 5.5% reached serious condition.

«The data shows that the protocol in our country is effective, and interferon plays a key role in these results.»

Referring to the medication’s use around the world, the doctor noted that important reports of preclinical and clinical evidence have appeared in several countries. One recent scientific article refers to a study conducted in Wuhan, China, regarding its use with medical personnel.

Of the individuals included in the study, 2,944 received the drug and 3,387 did not. Fifty percent of those not treated contracted the disease, while there were no cases identified among those who benefited from Cuban interferon.

At this time, more than 80 countries have expressed interest in acquiring Heberon, reflecting confidence in its usefulness in confronting the pandemic.