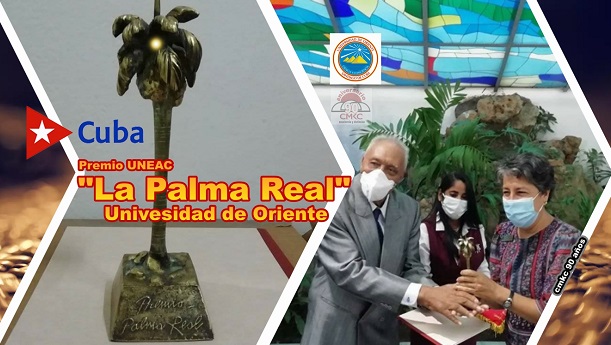 The University of Oriente received the UNEAC (Association of Cuban Writers and Artists) “Royal Palm” Award, which has been delivered for the first time by the provincial branch of the association.

The ceremony took place on October 20th, when Cuba celebrates the Day of the Cuban Culture, at the Stained Glass Hall of the “Antonio Maceo” Revolution Square.

According to Victor Hugo Leyva, professor and cultural promoter of the University of Oriente, the award was delivered by Rodulfo Vaillant, the UNEAC provincial branch president. Mr. Leyva told CMKC, “We stand side by side to defend national culture”.

The University of Oriente, founded in 1947, is a vital social and cultural institution. It has graduated several generations of Cubans and foreigners.

This is why the UNEAC decided to deliver the award to this higher education center, the 2nd oldest in the country.

This award has been delivered for the first time and it will annually recognize the work of organizations and people with a sustained work to favor the cultural, educational and social development of this province.