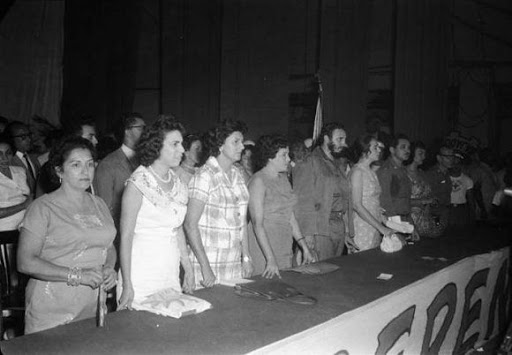 Author: Elson Concepción Pérez
Fidel taught us to wage battles and emerge victorious. Ever the great strategist, he foresaw all the variables that could appear. He prepared the forces, conceived possible scenarios, studied the enemy and was always present on the front lines with his troops.

Fidel. Today, his ashes resting within a boulder extracted from the bedrock of the Sierra Maestra, he would be contemplating what has been done, what remains to be done, the imperfections and the victory.

Fidel would know – he warned us -of existent and possible behaviors by persons who, amidst a new battle, could take advantage of any lack of vigilance to steal, misappropriate resources, and illicitly re-sell essential products, regardless of the titanic effort undertaken to make what we have available to all – be it a great deal or just a little, honestly obtained.

This is the context in which our people and leadership have unleashed the current battle to control the coronavirus pandemic and make the greater challenge – recovery of the national economy – a goal that is achievable if everyone works in a unified manner, making his or her own individual contribution to the colossal task.

In the struggle against COVID-19, Fidel is ever-present. His advice, warnings, strategies, and also his conception of a war of the entire people is very much present in the current situation.

The offensive underway today is being conducted by the entire people, with Fidel’s leadership.

In the Moncada program itself, he foresaw the development of the country’s human resources as key to the provision of health care and education. He went further, and in the first months following the triumph of the Revolution, organized a medical brigade to send to Algeria to support a sister people in need.

Fidel studied law at the University of Havana, but when he participated in designing the new health programs to be implemented, he gave the impression of an experienced doctor.

He conceived Cuba’s public health system and set about building it from the ground up. To offer just two examples – very visible during in the COVID-19 battle – he developed the idea of the family doctor and nurse closely tied to the community, and was convinced that science must play a role in the nation’s everyday life, leading the establishment of research and development poles.

This project thus conceived has nothing in common with the modern institutions created in capitalist countries, based on private, for-profit medical systems, producing supplies and medications for those who can pay for them.

The training of human resources to staff health care and educational programs, and the development of new revolutionary curricula to support our medical professionals’ work around the world, was also key to Fidel’s thinking. On more than one occasion, he commented that we could never train too many doctors, that they would always be needed.

Today with tens of thousands of our professionals offering solidarity, health care and humanism in more than 60 countries, expression of gratitude to Fidel and recognition of Cuba appear in the most remote communities, among all segments of the population, in many different languages.

This is a country that sends our best to offer health and save lives, asking nothing in return, regardless of the political affiliation or religious beliefs of patients. They are human beings and deserve the altruistic attention of this great army in white lab coats.

Fidel conceived of the Henry Reeve Contingent, aware of its importance in responding to pandemics and natural disasters. Difficult challenges would come to validate the Comandante’s foresight: earthquakes in Pakistan, Haiti and other countries; Ebola in West Africa; and finally COVID-19, caused by a lethal virus that within a few months’ time has ravaged the planet, taking the lives of half a million human beings.

If many more have not died, if thousands have recovered after being infected, Cuban medicine and solidarity have contributed to this victory, and Fidel can be thanked for this, as well.

Without Cuba making any such request, and amidst a ferocious defamation campaign by the Trump administration and its mercenaries against our internationalist brigades, many people of good will around the world are advocating the awarding of the Nobel Peace Prize to Cuban doctors in the Henry Reeve Contingent.

Individuals and organizations in many different political currents, languages and cultures are insisting that our professionals are more than deserving of this international distinction.

Fidel is also leading this medical brigade and those who have benefitted from Cuban solidarity express gratitude to him, as well.

The COVID-19 pandemic has imposed another battle, that Fidel is winning, too. The national articulation of all sectors in the effort, and the capacity of the country to prevent the numbers of deaths seen in other lands, offer testimony to the concrete application of Fidel’s thinking, continued under the leadership of President of the Republic Miguel Díaz-Canel, with the wise guidance of Army General Raúl Castro Ruz, who provides certainty and confidence, as well.

This August 13, on the 94th anniversary of the Comandante en Jefe’s birth, with his ashes resting in a monumental boulder in his beloved Santiago, his great battles and victories will continue to be of obligatory reference for a people who, as a matter of principle, have assumed the construction of our own destiny – the destiny he charted for us that we will always defend.