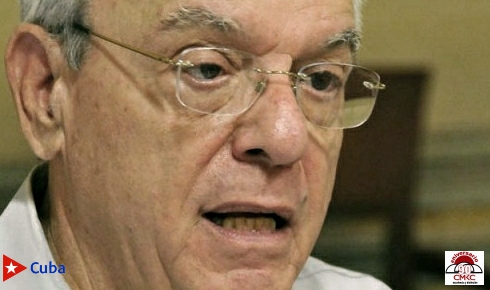 The Office of the Historian of Havana City enabled a condolence e-book to pay tribute to the Cuban historian Eusebio Leal, who died on July 31.

The idea aims to offer people an opportunity to sign their love and various initiatives online, for those who cannot go to the Museum of the Havana City in the Palacio de los Capitanes Generales.

On Facebook, the entity published its gratitude for ‘the samples of affection and initiatives that across the country, and in other latitudes, express the feelings of the Cuban people and their friends from other parts of the world regarding the physical loss of this great man.’

The e-book, which address is bit.ly/39Oo4PP, joins the various actions that have recently paid homage to the also PhD. of Historical Sciences, whose office resided in the aforementioned entity and which now guards flowers, letters and signs that read in large letters: ‘Thanks, Leal.’

There have been several tributes to the also Honorary President of the Union of Historians of Cuba in different provinces of Cuba, the authorities of all territories recognize him as one of the main architects of the island’s cultural heritage.

Meanwhile, different creators highlight his sensitivity to the arts, his remarkable restoration work and the creation of fundamental spaces for music, the plastic arts, and dance, among others.

According to official sources, the funeral of the prominent intellectual will be held in the National Capitol once the Covid-19 pandemic has been controlled, and in accordance with the wishes of Leal’s family, his ashes will be preserved so that the Cuban people will pay him then the deserved tribute.