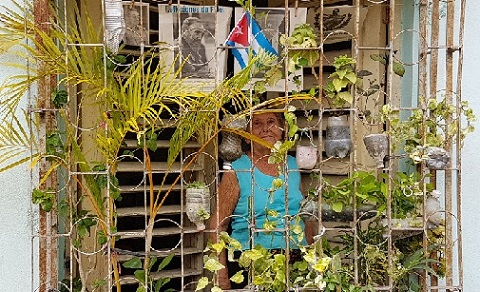 The combined effects of the international economic crisis, deepened by the pandemic, and the deepening to extremes of the US economic, commercial and financial blockade (with more than 130 punitive measures in the last two years), have had a harsh impact in Cuba.

The country has had to face the paralysis of tourism for months, as a consequence of the expansion of COVID-19; which has notably affected foreign exchange earnings and the Gross Domestic Product. In turn, it has had to spend more than 1,500 million Cuban pesos and more than 100 million dollars for the expenses of the confrontation with the pandemic by the national public health system.

The intensified blockade promoted by the Trump administration has caused damage that for the first time in history exceeds the figure of 5 billion dollars in a year; a doubly genocidal act in a period of global alarm over the spread of the deadly viral disease.

2020 will close as a result, with a significant economic contraction, a significant lack of liquidity in foreign currency, a shortage of goods and services and an obvious impact on the quality of life of Cubans.

Faced with this complicated scenario, the Cuban government worked urgently to adjust the economic plan and to create a Social Economic Development Strategy that proposes immediate and medium-term answers to the questions and problems that have been opened or deepened in the present circumstances.

The Strategy is based on fundamental principles of the Cuban socialist economic model, but seeks to eliminate obstacles and obsolete practices. It is based on maintaining the centralized planning of the economy, although giving greater autonomy to the business sector; This business sector and the non-state economy are resized, the market is being regulated by indirect and non-administrative methods, it is about boosting internal demand, boosting national production and banishing the import mentality, promoting exports, achieving complementarity between diverse economic actors, stimulate competitiveness, efficiency and savings, and maintain an environmental policy in harmony with social order.

The Council of Ministers defined 16 key development areas, among which food production is included with priority (the country imports an average of 2 billion dollars annually), as well as the sugar agro-industry, tourism (which contributes 10 % of the country’s GDP), professional services (main contributor of foreign exchange), the biopharmaceutical industry and biomedical productions, telecommunications and energy.

The actions approved are aimed at boosting agricultural and food production in general, promoting exportable products, strengthening the state enterprise, decentralizing the allocation and use of foreign exchange in the economy, improving and expanding the non-state sector, encouraging programs of territorial development (in provinces and municipalities) and increase the process of computerization of society.

An essential step to advance the Strategy is the monetary and exchange unification in the country, which will be put into practice as of January 1, 2021. In Cuba there are currently 2 national currencies circulating (CUC and CUP) and there are 2 types exchange rate (one for individuals and non-state entities and another for state companies and institutions and other legal entities), which makes the management of the economy very complex and distorts its size and real efficiency.

The new process, which is being intensively organized these days, will leave the Cuban Peso (CUP) as the only legal tender and a single official exchange, which will be fixed for the moment, of 24 CUP for 1 USD.

At the same time, a group of subsidies and gratuities in force today will be eliminated (although more than 30 billion pesos in subsidies are still maintained as an act of social justice), prices will be modified upwards according to the new devaluation environment and wages, pensions and social assistance benefits will be raised.

The Monetary and Exchange Rate Regulation should help to put all actors in the economy on equal terms, to generate greater competitiveness and efficiency, to encourage exports and discourage imports, to stimulate the need for work as the main source of income for workers. citizens and to make the country’s finances and economy more transparent and measurable.

But a complex and essential process like this entails risks such as the possibility of higher inflation than expected, with the consequent social impact that it would cause. To this end, relative price control mechanisms are reinforced and, amid difficult conditions, a modest increase in the supply of goods and services is sought; above all, from national production.

Added to this is the complexity that the existence of a circuit of stores in Freely Convertible Currency introduced into Cuban society, a measure not so popular, but inevitable to stop the drain of foreign currency abroad that had occurred in recent years ( in the order of billions some specialists calculate) as a result of purchases of goods in nearby markets by individuals or groups of people who later sold them in the informal market in Cuba.

2021 will be a very important year to try to boost the Cuban economy, despite the adverse conditions in the international environment. Deepening the implementation of the Social Economic Strategy; Eliminating obstacles, acting creatively and intelligently will be essential to make this route effective. A modest growth of the economy is expected from, among other aspects, growth in almost all exportable items. Although this would be insufficient to reach levels equal to the results of 2019.

Cuba is waging its own battle against the demons of the economic crisis and the blockade. It does so with independence and sovereignty and with popular participation in the search for solutions that preserve the quotas of social justice that the Revolution has always won and defended. A huge challenge in the turbulent times we live in.