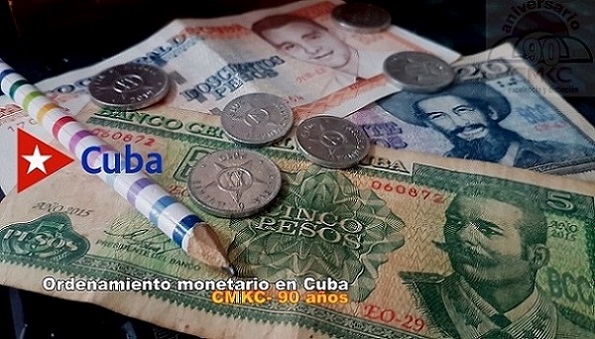 As announced by the main Cuban authorities, the process of monetary re-ordering begins in Cuba, which includes the elimination of the monetary and exchange duality, the reform of salaries and pensions and the elimination of undue gratuitousness and excessive subsidies.

As of this Friday, the exchange rate will be 24 Cuban pesos to one dollar and the Cuban Convertible Peso (CUC) will cease to circulate within 180 days; during that period, cash held in this currency by individuals will taken at exchange houses and bank branches.

In the stores or other establishments previously authorized, the CUC will be accepted only for the purpose of executing the transaction and withdrawing it from circulation.

Savings accounts in CUC, deposits and certificates of deposit of individuals are kept in that currency for a period of up to 180 days, and during that period their holders may decide whether to convert their balance, totally or partially, to CUP -at the exchange rate of 24 x 1-, to US dollars or Euros.

Starting today, employees earning more than 3,260 pesos per month will pay taxes on their personal income, which can be three or five percent, according to a scale set by the Ministry of Finance and Prices.
Aspects related to taxes, principles, rules and general procedures of Law 113 of the Tax System are also modified

As of January 1, products imported by natural or legal persons based in Cuba will have a debt in Cuban pesos, calculated on the import value in U.S. dollars and based on the percentage that is applied to the debit value of the imported products

Likewise, self-employed workers who provide the service of transportation of cargo, of passengers in the modality of «regular service», or both services, by means of the use of magnetic cards, will be applied the wholesale prices established by the Minister of Finance and Prices, of the fuels that are sold in the service centers.

The prices of the cultural and sports services are restructured, the current rates of the tourist packages and other exports of services are converted to Cuban pesos, by applying the exchange rate, and new maximum prices for the collection of the agricultural products are approved, which are the subject of contracts between the state entities and the producers.

They keep their retail value and the drugs associated to chronic diseases with permanent treatments, products of natural and traditional medicine, products of optics, as well as the medical articles of the National Center of Technical Orthopedics Cuba-RDA and the services of orthopedic footwear repair that are carried out in the repair workshops of the local organs of the Popular Power are subsidized by the State.

In general, 46% of the medicines sold in pharmacies, 162 of the 353 dispensed in this way, will be subsidized by the State budget and will maintain their current value.

For equal products that are commercialized with different prices in all the commerce network, a unique value in Cuban weight is established, the supply book is maintained, the free delivery of modules for children with nutritional deficit, low weight and height.

It is stipulated that in Havana the trip by public transport will cost two pesos (as well as by sea in boats), while in the rest of the provinces it will be one peso, and in the case of transportation by buses and road cabs in Havana, managed by the non-state forms, it will be five CUP.

During the year 2020, we faced exceptional economic conditions.  Any adjective would be insufficient to describe the atrocious combination of an ironclad blockade and the pandemic’s impact on the economy and society. We refer to the accumulated effects of the financial persecution and the barriers to any source of income in hard currency that have been opportunistically reinforced during the pandemic and the worldwide economic contraction it provoked, with the consequent interruption of tourist activity, one of the country’s principal sources of income; reduced imports; a decline in productive and service activity, in both the state and non-state sectors; and the additional health expenses beyond those foreseen in the plan: along with increased financing provided by the State Budget, among other factors.

Designing the Economic Plan for the year 2020, we foresaw achieving growth on the order of 1%, even under conditions of strong limitations. As has occurred in practically all regions and countries, COVID-19 obliged us to modify all of our projections.

The economy has fallen, but has not come to a halt. We have approved an Economic-Social Strategy and the National Economic and Social Development Plan through 2030, and studies were concluded on the implementation of monetary re-ordering, which will begin this coming January 1.

Within the worse context, important investments were made in our principal development efforts, including the housing program, with 47,400 dwellings finished; the tourism program, with 2,000 new hotel rooms; the first bio-electric power plant began operating in the country and investments in the water distribution system and food production, among others.

At the same time, 29 foreign investment projects were approved, involving 2.455 billion dollars – five of these in the Mariel Special Development Zone, the country’s important, strategic economic enclave, where companies from 21 countries and 11 multi-nationals operate. Fifty-five businesses have been approved there, involving a committed total of more than three billion dollars, generating 11,763 new jobs.

While insecurity associated with the pandemic’s evolution and its serious impact on the world economy predominated in the period during which the 2021 Economic Plan was crafted, expected next year is a gradual process of recovery, with growth of six to seven percent, which will require intense work by all economic actors. Achieving this objective requires that we control COVID-19, in order to avoid setbacks in the opening we have already begun in tourism and productive activity in general.

The country will continue working on our development. The investment plan has been increased by 22% as compared to the year 2020, with 60% of the resources concentrated in priority sectors: food production, medications; defense, tourism; renewable energy; the housing program, as well as cement and steel production plants.

Despite the contraction that this year has left us, we do not renounce achieving the projected growth in the second stage of the National Economic and Social Development Plan, which is the period from 2022 until 2026.

To do so, it is imperative to continue advancing more rapidly and with clear priorities in the implementation of the Economic-Social Strategy, and maintain control of inflation, to avoid its development beyond levels projected in monetary re-ordering plans; encourage the generation of new jobs, fundamentally in productive activity, which necessarily requires increased local development; prioritizing tourism, to support its gradual recovery and with an emphasis on supplying the retail sales market in national currency, especially high-demand products.

Likewise prioritized is the promotion of investments in the Mariel Special Development Zone and increased sales by domestic entities to the Zone, beyond what has been projected in the Plan, and the participation of domestic industries as suppliers for retail and wholesale sales in hard currencies.

In this context, it will be necessary to reduce the fiscal deficit projected, on the basis of greater efficiency in public spending and increased income for the State Budget.

With the beginning of monetary re-ordering, the year 2021 will be decisive in the economy’s gradual recovery, as we are able to create more favorable conditions for the development of the national productive sector.

These priorities are related to some of the advances achieved during this difficult year, such as territorial development programs, the management of science and innovation, the network of molecular biology labs, new authorities granted to the (state) enterprise system, the program for the advancement of women, the agricultural sales policy, the creation of technological poles and mercantile associations to serve as interfaces between universities and enterprises.

The direction of the economy has been designed on the basis of the principle of ensuring, as essential objectives, access to food, fuel, fertilizer and pesticides, medications, meeting the demands of defense, as well as the priority of obtaining financing for domestic industry, making a reality of our intention to avoid importing what we can produce efficiently within the country.

The guiding principle has been to introduce modifications to achieve greater flexibility, objectivity, and innovation in response to problems and the search for solutions.