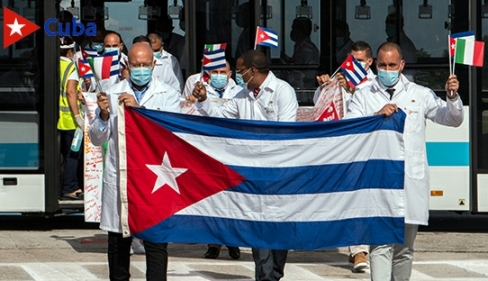 Seattle City Council requests that President Biden reverse the inclusion of Cuba on the U.S. list of state sponsors of terrorism and encourages local medical, academic and pharmaceutical institutions to actively explore collaboration with their Cuban counterparts.

The absurd inclusion of Cuba in the U.S. State Department list of countries it considers to be sponsors of terrorism, a unilateral decision by former President Donald Trump, has generated condemnations from many countries, organizations and personalities around the world, including the U.S.

The Seattle City Council (Washington state) requested that President Joe Biden reverse the inclusion of Cuba on the spurious list. The resolution, signed by Seattle City Clerk Monica Martinez Simmons, also calls for initiating collaboration with the island in the area of health.

Martínez-Simmons noted that Cuba has a tradition of sharing its knowledge with other nations, and citing as an example the work of numerous medical brigades in various parts of the world.

The text also calls for an end to the economic, commercial and financial blockade the U.S. has maintained against Cuba for almost six decades.

A number of other U.S. cities and institutions have stated their opposition to the blockade, as well, while in 2020, more than 14 cities expressed the desire to collaborate with Cuba in combating covid-19, including San Francisco, Richmond and Berkeley.