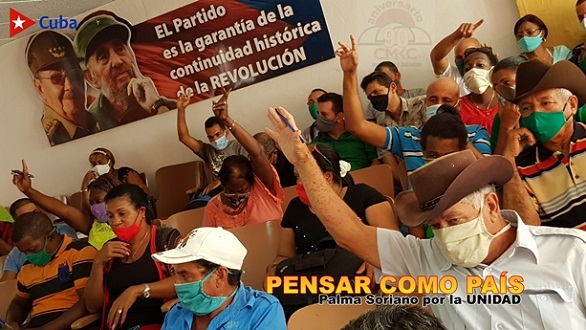 Economy- The Economy Restructuring Process in Santiago de Cuba is moving forward with the productive and service activity towards the economic vitality of the province based on the rigorous application of the hygienic-sanitary measures and the new orientations.

The economy in the province of Santiago de Cuba is already marching with the most important transformation it has ever undergone in its monetary and exchange structure.

It also implies a move towards the elimination of excessive subsidies and undue gratuities, as well as the beginning of a reform of wages, pensions and social assistance benefits, which modifies the income of the population.

Economy- Just in the year when a historic 8th Congress of the Communist Party of Cuba will be held, one of the most complex and decisive agreements of the two previous meetings is implemented with regard to the invigoration of the economy; although the ideal conditions have not been created, delaying its application would have implied prolonging several deformations that would prevent the achievement of the development rates proposed by the country’s economic-social strategy, and which would be added to those heavy burdens represented by the intensified blockade of the United States and the deep impacts of the COVID-19 pandemic.

Economy- Conceived and applied without going through any of the shock formulas which, with the devaluation, would result in automatic peaks of unemployment, insolvency, lack of social protection and other effects contrary to our socialist system. To face this decision has been more difficult because it means to do it without breaking one of the principles that sustain the human and social vocation of the Revolution.

Nevertheless, in the quest to have more vigorous capacities to maintain such conquests, and to take great steps towards the prosperity we require, it was necessary to be more daring in the revaluation of the role of labor, in the redistribution of the existing wealth, and in the creation of favorable conditions for a greater efficiency of the economy.

In this endeavor, unity as a country must continue to be the key that will lead us to the success of this complex process that demands from Cubans to align ourselves to place labor as the main source of development, and to articulate ourselves in the firm confrontation of those who seek to profit–for the benefit of a very few and at the expense of the majority–through an opportunism that perverts or slows down this leap of the nation to the path of sustainable progress.

By: Carmen Yero
Quality is the spirit of the Barquillo industrial park in Santiago de Cuba, which arose from the need to increase food production; hence more than fifty items of popular high demand at home are produced in this place.

Quality- The workers of the Barquillo production area in Santiago de Cuba, committed themselves to make optimal use of resources, take care of them properly and work to provide the greatest possible variety and quantity of products for the people with energy saving in mind.

Quality- In «Barquillo» the authorities of the Party and the Government of the province demanded that the production plan of the entity be respected and met with diversification of deliveries and efficient use of the installed technology, as part of a work system that implies permanent checking of the economic parameters.

In the fruit and vegetable area details are being finalized for the beginning of the exploitation of the installed technology, where it is urgent to work with more emphasis for its entry into operation and to make possible the increase of the portfolio of products, which exceeds 50 now and is expected to exceed 80 in the future.

Likewise, the area of traditional ovens to be operated with coal and firewood requires that management respect and control the construction schedule to constantly check the progress of the works to ensure completion with quality.