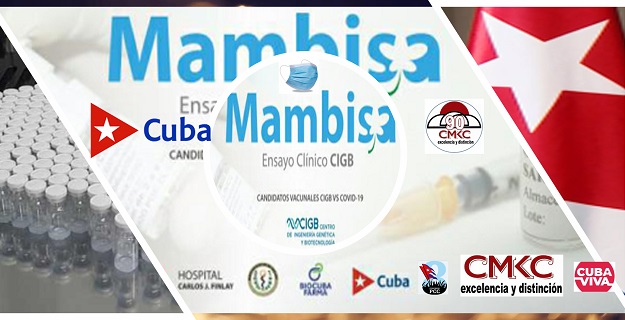 Image: Santiago Romero Chang
Cuba’s Mambisa, a vaccine candidate developed by the Cuban Center for Genetic Engineering and Biotechnology (CIGB), is one of the five nasal vaccines in the world now in the stage of clinical trial, CIGB director Marta Ayala Avila told the daily Granma.

Cuba’s Mambisa,- The Doctor of Sciences added that the formulation is also the only one of its kind based on the platform of recombinant antigens, a technology with a number of advantages, including the safety level (few, slight adverse effects have been recorded), the possibility of giving multiple doses to strengthen the immune response over time, and its potential to act on the nasopharyngeal mucosa, which is particularly convenient, as it is a vaccine candidate against a disease whose entry point is through the respiratory tract.

Cuba’s Mambisa- In 2015, the CIGB registered HeberNasvac, the first nasal spray therapeutic vaccine in the world against a chronic infectious disease (chronic hepatitis B).

“We used for Mambisa one of the proteins of that product: the nuclecapsid, a protein that forms the nucleus of the virus and is capable of stimulating an immune response. At present, this vaccine candidate has completed the Phase I clinical trial with 88 volunteers.”

Dr. Gerardo Guillén Nieto, Director of Biomedical Research at the CIGB, said that at that stage the drug showed a good level of safety, and the preliminary results revealed an effective immunological action.

Likewise, in studies carried out with people who suffered from the disease during the first peak of the epidemic in Cuba, Mambisa proved to be a good candidate to reinforce the immune system after a single dose.

There are plans to coordinate with hospitals a Phase I/II clinical trial on people previously infected with the virus. Those selected will receive a single dose of the Mambisa candidate with a view to an assessment of its safety and capacity to boost the subject’s immune system, the scientist explained.

Havana, Mar 29 (Prensa Latina) Vaccination in phase III of clinical trials and the intervention study on the vaccine candidates Soberana 02 and Abdala against Covid-19 involves more volunteers at present, according to BioCubafarma.
Data provided by the Entrepreneurial Group of the Biotechnological and Pharmaceutical Industries of Cuba (BioCubafarma) show that as part of phase III of clinical trials on Soberana 02, which started on March 8, 35,153 of 44,010 subjects have been vaccinated so far in eight municipalities in Havana.

Soberana 02, which was developed by the Finlay Vaccines Institute (IFV), is also being used in an intervention study that involves 150,000 subjects from high-risk sectors of the population, including 74,665 health workers and from the scientific complex, 47,266 of whom have already received the first injectable dose of the vaccine.

On the other hand, Abdala, created by the Genetic Engineering and Biotechnology Center (CIGB), has been administered to 19,524 of 48,000 volunteers as part of its phase III of clinical trials in the eastern provinces of Santiago de Cuba, Granma and Guantanamo.

Abdala is also being used in an intervention study against Covid-19 that involves 124,000 volunteers from the health sector and the biopharmaceutical industry in eight regions of Havana.

Cuban scientists have developed three other vaccine candidates against the SARS-CoV-2 coronavirus that causes Covid-19: Soberana 01 and Soberana Plus (also by the IFV), and Mambisa, which is administered nasally and was also created by the CIBG.

Ankara, Mar 23 (Prensa Latina) Turkish media on Tuesday highlighted the advances of the Cuban biopharmaceutical industry and the development on the island of phase III clinical trials of the vaccine candidates Soberana 02 and Abdala, against Covid-19.
In articles published on their websites, the Sol newspaper and Bursa Hakimiyet highlighted that, despite the U.S. blockade, Cuba is getting closer and closer to becoming the first in Latin America to obtain its own formulations against that disease.

They also acknowledged the good results obtained so far in the tests carried out with Soberana 02, a drug now used in an intervention trial to evaluate the effects of vaccination in high-risk sectors of the population.

This product, developed by the Finlay Vaccine Institute (IFV), and Abdala, from the Center for Genetic Engineering and Biotechnology (CIGB), are the most advanced proposals from Cuba, a country that has five vaccine candidates and intends to immunize all its citizens before the end of 2021.

Meanwhile, Soberana 01 and Soberana Plus, also from IFV, are passing favorably through the first stages of trials and, according to experts, will be intended for convalescents and to reinforce a pre-existing immune response.

Likewise, Mambisa, created by CIGB and the only drug with nasal administration, showed safety and few reactions in the people who received it during Phase I.