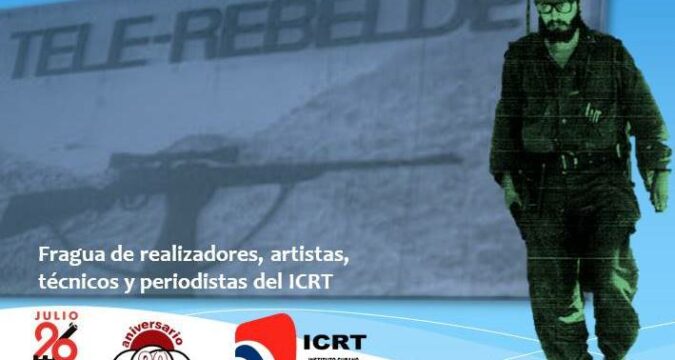 Image: Santiago Romero Chang
Telerebelde, A Pioneer TV Channel. The expansion of the informative-cultural spectrum of the inhabitants of the former Oriente province, the most extensive and populated in the country then, were among other reasons that permitted that on July 22nd, 1968, the Tele Rebelde TV Channel went on the air from Santiago de Cuba, the first one in the nation with transmissions originating outside Havana.

Telerebelde- In the inaugural act TV announcer Consuelito Vidal made the presentation of Commander of the Revolution Guillermo Garcia, who explained the plans and objectives of the new television channel in front of his workers whose mission was: «To transmit a television signal with quality in the eastern provinces, which was also committed to the Cuban revolutionary process in order to promote the political, economic and socio-cultural development at the municipal, provincial and national level».

The opening of this new television channel was possible with the use of some equipment already in disuse and others rescued from the national channels installed in the Mariana Grajales Theater, in areas of the July 26th School Complex, conditioned as a television studio and its corresponding technical facilities for broadcasting. A group of specialists and technicians from the National Television traveled to Santiago de Cuba to train young people from this city to keep the channel on the air, an objective that they accomplished in just a few months.

Tele Rebelde, the eastern television channel, from Santiago de Cuba was on the air from six in the evening until midnight from Monday to Sunday with drama, children, sports, musicals, science and technology shows and two daily news broadcasts; with remote control transmissions of musicals and sports such as baseball and boxing.

In 1976 Tele Rebelde opened a studio in the city of Holguin, which allowed spreading the cultural heritage of this territory. It was 1981 when the National Direction of the Cuban Institute of Radio and Television (ICRT) proceeded to the unification of Channel 2 that transmitted from Havana with Channel 5 Tele Rebelde, Tele Rebelde, its companion channel, with studios in Havana, Holguin and Santiago de Cuba. On May 25th, 1987, with the creation of a nationwide network of telecenters, Tele Turquino’s signal went on the air for the first time from Santiago de Cuba.

The Tele Rebelde Channel was born 53 years ago in Santiago de Cuba as a forge of many talents.

The website, Tvsantiago, was launched in its Spanish version on July 22nd, 2002 on the occasion of the 34th anniversary of the television in Santiago de Cuba.

The local TV station is driven by the privilege of being part of a history with men and women who founded with heart and soul the television of Santiago de Cuba at the end of July 1968.

Its founding motive was rebellious then, today it continues to be so with new roads and paths that demand conviction, dedication and renewal of thoughts.

Some of those who made the utopia a reality are no longer alive; others are still contributing with their wisdom and advice in the daily work.

But the unchangeable truth is that the accumulation of these experiences, with successes and failures, with battles won or to be won is what legitimizes a history of growth and expansion that today embraces every corner of the province with the perpetual mission to bring to light the reality and the truth of our people.

The experiences gathered every day in direct exchange with the people, and everything learned while a lens captures feats or desires, are the tools that pave the way to be increasingly empathetic, truthful, sensitive, objective, familiar and respectful of a plural and diverse society.

The TV staff looks to a future that demands more interactivity, feedback, multimedia and mobility in artistic creation. That is where challenges should be focused. To put heart and soul in function of the demands of the new times and the dissimilar realities that define Santiago de Cuba.

To this team, to the members of this family, thank you for building, sounding, creating, and giving a portion of yourselves to this collective adventure.

The Tele Rebelde Channel was born 53 years ago in Santiago de Cuba as a forge of many talents.

It is a hard task, nobody denies it, not without stumbles and sacrifices, but being the image of a town like Santiago de Cuba is always a work in progress, where those who love television will find their gratifications.