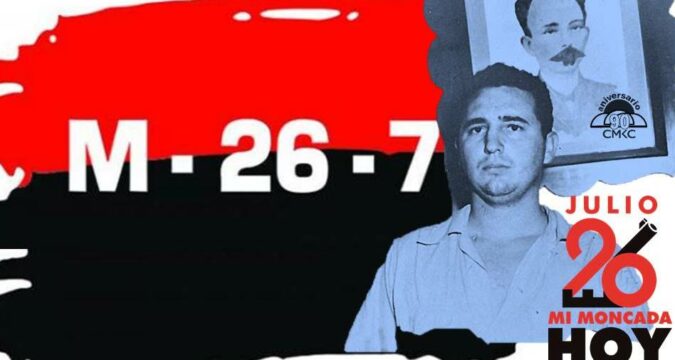 The Moncada Garrison History
(former colonial Garrison called Reina Mercedes)
This Cuban military Garrison entered history after the attack of a group of young people led by Fidel Castro whose objective was to take the Garrison and then go to the hills of Santiago de Cuba to start the fight against the dictatorship of Fulgencio Batista. At present it houses the July 26th School Complex.

The history of the Moncada Garrison began in 1859, when the first stone was laid of what later was initially known as the New Prison Garrison, because it was destined to serve as a departmental prison in Santiago de Cuba.

In 1859 Brigadier Carlos de Vargas Machuca, governor of the jurisdiction of the Eastern Department of the Island of Cuba, started the construction of the Reina Mercedes Garrison – in honor to the wife of King Alfonso XIII.

During the independence wars of the 19th  century the Reina Mercedes Garrison, besides sheltering the Spanish troops during the conflict, kept many patriots prisoners in its dungeons and also had the mission of defending the square of Santiago de Cuba. On November 21, 1893, Major General Guillermon Moncada was detained by the Spanish authorities in La Caoba (Alto Songo) and put in the dungeons of the Reina Mercedes Garrison.

On August 18th, 1902 the then lieutenant colonel Saturnino Lora Torres was appointed  «Chief of the Rural Guard of the East», with headquarters in the Reina Mercedes Garrison. It is supposed that Lora was the one who suggested naming the Garrison after Guillermo Moncada.

On August 19th, 1906 -on the occasion of the uprising of Pino Guerra in Pinar del Rio-, the Rural Guard, following orders of the Secretary of Government, arrested in El Caney General Demetrio Castillo Duany and Juan Gualberto Gomez, who were sent to the Garrison of Santiago de Cuba.

In January 1909, during the second American intervention in Cuba, the governor Charles Magoon, by means of decree, retired by «physical limitations» the already general Saturnino Lora as Chief of the Rural Guard in the eastern part with headquarters in the old colonial garrison.

On January 30, a decree signed by then President Jose Miguel Gomez promoted Lieutenant Colonel Juan Vaillant y Lopez del Castillo, and named him head of the Rural Guard in Oriente.

According to the Santiago de Cuba historian Carlos E. Forment, in his Chronicles of Santiago de Cuba, since February 1909 the old Garrison, where a regiment of the Rural Guard operated, began to be called Moncada.

In 1910 General Vicente Miniet, who was uprising in San Luis, was arrested by troops under the command of General Monteagudo, chief of the Army and taken to the Moncada Garrison.

In 1917 took place the “Lollipop” Insurrection when the Moncada Garrison troops,  which supported the liberals of Jose Miguel Gomez, revolted.

In 1930, during the student and worker’s struggle against Gerardo Machado, the infantry regiment located in the Moncada Garrison went out to the streets with machetes to repress the demonstrators. Many were detained in the Garrison where the First Military District of the province was located. Gerardo Machado appointed military supervisors in each province and in Oriente he designated commander Arsenio Ortiz, called «the Jackal of Oriente» for his crimes.

On August 10th, 1931 the anti-imperialist leader Antonio Guiteras rose up in La Gallinita. He was imprisoned and taken to the Moncada Garrison where he remained until he was transferred to the Guantanamo Prison.

On September 5th, 1933, just after the overthrow of Gerardo Machado, Antonio Guiteras met at the Moncada Garrison with members of the University Student Directorate to prevent the landing of a U.S. destroyer.

On December 11th, 1937 a strange fire destroyed the old Moncada Garrison. The Cuban House of Representatives granted a credit of one hundred thousand pesos for its reconstruction.

Before the military coup by Fulgencio Batista in the Columbia Garrison on March 10th, 1952, the Moncada garrison hesitated in its first moments before the presence of the civic institutions of Santiago de Cuba and the people asking for weapons for the resistance. A few hours later it betrayed its people and joined the coup. The then Captain Alberto del Rio Chaviano assumed the leadership of Regiment No. 1.

On July 26th, 1953 a group of young men, on the centenary of the birth of Jose Marti and under the direction of the future leader of the Cuban Revolution Fidel Castro, attacked the Moncada Garrison. After the attack the facility witnessed the massacre and murders of many of these heroes.

During the war against the Batista dictatorship between 1956 and 1958, hundreds of young people were taken prisoner to the Moncada Garrison. Most of them were tortured to death in its dungeons.

After the revolutionary victory of January 1st, 1959, the Moncada Garrison surrendered to the forces of the Rebel Army. Commander Raul Castro entered victorious at the head of the revolutionaries.

On January 28th, 1960, the Moncada Garrison became the 26th of July School Complex. The commander in chief Fidel Castro made the delivery to the Ministry of Education, and emphasized in his speech:

“By winning this battle without corpses, without deaths, without wounded, this beautiful battle, this taking of the Moncada Garrison without blood, we have to feel truly excited and happy (…)”

It was also decided to create a museum in the premises to recreate in detail the actions that took place on July 26th, 1953.