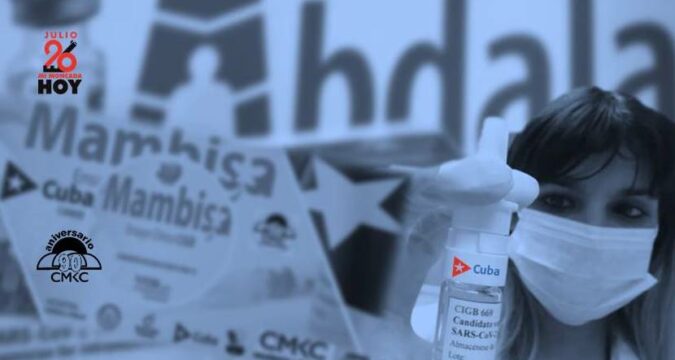 Mass vaccination in Cuba began precisely at a time when COVID-19 infections were increasing significantly, generating concerns within the population about the effectiveness of our nationally developed vaccines.

Mass vaccination in Cuba began precisely at a time when COVID-19 infections were increasing significantly, generating concerns within the population about the effectiveness of our nationally developed vaccines.

Appearing yesterday on the Mesa Redonda television program, DSc Eduardo Martinez Diaz, president of the pharmaceutical state enterprise group BioCubaFarma, explained that the main cause of the increase in positive cases of the disease is the incidence of the Delta variant of the SARS-COV-2 coronavirus, with characteristics that make it much more contagious and lethal than its predecessors.

He noted that countries with high vaccination coverage (i.e. Israel and the United States) have experienced a wave of infections following the appearance of Delta in their territory, as occurred in countries where the strain already predominates. Such is the case of Cuba.

However, studies have shown that Delta cannot evade the immune response induced by vaccines known in the world today, although it does reduce their level of effectiveness, which is why infections among vaccinated individuals have been reported.

What has occurred with Cuban vaccines? Vaccination began in May, in four Havana municipalities, and only eight weeks have elapsed since the completion of that process, during which effectiveness could be evaluated. «In other municipalities, it’s been only six or four weeks; in other words, it is only now that effectiveness is beginning to be measured,» noted Dr. Martinez.

Using a graph, the expert displayed data from the Cuban capital as compared to the rest of the country, during the period between May and August 24.

He explained that the first four municipalities where vaccination began were, at that time, facing an incidence rate higher than Havana as a whole. They are now exhibiting a rate below that of other capital city municipalities.

In July, the Delta variant began to circulate in the capital and cases increased. Even in this scenario, he noted, «There has been a tendency in the other municipalities to coincide with figures in the first four, where vaccination began, since the rest of the municipalities have reached the immunity maturation period (14 days after the third dose),» he said.

Meanwhile, the lethality rate in the capital – which in May was higher than the country’s average – began to decrease, to the point that in the four municipalities where mass immunization as initiated, it is six times lower than in the rest of the nation, the doctor reported.

«There is evidence that our vaccines work,» he reiterated, adding that in municipalities where vaccination has begun and enough time has elapsed to carry out studies on the effectiveness of the vaccines, the results are positive.

On hand to discuss progress being made in the Ismaelillo pediatric clinical trials with the Abdala vaccine, currently in Phase III in the city of Camagüey, with subjects from three to 18 years of age, was DSc Marta Ayala Ávila, Party Political Bureau member and general director of the Center for Genetic Engineering and Biotechnology (CIGB).

She reported that the administration cycle has concluded among subjects 12 to 18 years of age, and vaccination of the younger group will be completed shortly.

She specified that 1,190 doses have been administered to the 592 volunteers included in the trial, and once the results are obtained, emergency use of Abdala will be requested for the protection of our children and adolescents, currently most likely to be infected, since thus far, only those over 18 years of age have been vaccinated, of which more than three million have received the complete three-dose regimen.

He insisted that it is in the government’s interest to achieve general immunization, especially in light of the Delta variant’s presence, which has tested the effectiveness of vaccines around the world, including Cuba’s; hence the industry is focusing on increasing production and quality control before releasing each batch.

To date, more than 16 million doses have been distributed, and 5,449,480 Cubans have received at least one injection. The experts insisted that statistics will continue to improve as mass vaccination advances – a process which began after emergency use of the vaccine was approved July 9.

Also significant is data obtained on the vaccine candidate Mambisa, one of only seven around the world administered nasally. The studies, thus far, show that 78.8 % of those who receive the solution develop greater immunity, by increasing the presence of immunoglobulin A (IgA) in mucous membranes and saliva, Dr. Ayala explained.

A study of Mambisa with convalescents is in Phase I-II at Hermanos Ameijeiras Hospital in Havana. The vaccine is expected to stimulate an intranasal barrier against the infection that would prevent the replication of SARS-COV-2 and reduce propagation of the virus in nasal cavities and the upper respiratory tract, where it usually enters and spreads.

Ayala clarified that Cuban vaccines have the advantage of proven safety and innocuity. «This guarantees that patients do not develop an infection when they are inoculated, since they receive formulations with protein bases. And our immunogens also offer the option of combination with each other, as well as others, in order to strengthen the body’s defenses.”

The CIGB director added that, given the emergence of such highly contagious, life-threatening strains as Beta and Delta, it is an advantage for our country to have prioritized vulnerable and at-risk groups in vaccination plans, putting us in a better position to confront COVID-19, avoid severe cases of the disease and reduce the number of deaths due to complications.

Also invited to participate in the program was Dr. Vicente Vérez Bencomo, director of the Finlay Vaccine Institute, who reported important news related to the process of vaccinating the Cuban population against the SARS-COV-2 virus.

He presented details of progress made in the Soberana Pediatría clinical trials, in which the first two doses of Soberana 02 were administered to subjects between 12 and 18 years of age, 93% of whom responded positively. In the case of children between three and 11 years of age, the indicator was much higher, with effectiveness of 99.3 %, which is excellent news.

With such results, the necessary documentation has been submitted and authorization has been requested from Cuba’s regulatory authority for the emergency use of the formula in the pediatric population, two years of age and above. Some 4.2 million doses are needed for the effort, which will be ready by September 15.

He clarified that there is evidence of a greater immunological response in children, when compared with that of adults. He cited the example of adolescents who have received the third dose and have considerably increased their level of antibodies.

Also encouraging is the news that the Soberana Plus vaccine, designed as a booster administered with others, mostly commonly with Soberana 02 thus far, can be used to strengthen the immune capacity of vaccines manufactured in other latitudes, including AztraZeneca, Sputnik and Sinovac, an option which has aroused interest in several countries, he stated.

Dr. Vérez described as significant the decision made by the British medical journal The Lancet, one of the most prestigious in the world, to publish the results of the Phase I study in convalescents, one of the first to be published there.

He also announced that, following the conclusion of the Phase II study, a request was made to the regulatory authority to extend the emergency use of Soberana Plus in pediatric convalescents, which will require 500,000 doses. Production has been scaled up and the needed quanity will be ready by mid-September.

Another study being conducted, Dr. Vérez explained, is one of Soberana Centro, designed based on the use of two doses of Soberana 01 or Soberana 02, plus one dose of Soberana Plus, which should be completed in October in the municipalities of Cruces and Palmira, in the province of Cienfuegos, already having an important impact.

Recalling the intense research program undertaken by Cuban scientists, to rapidly provide answers to the emergency generated by COVID-19, the doctor recalled when they talked, for the first time in Cuba, about a heterologous vaccination regimen, based on the combination of several immunogens, in that case two doses of Soberana 02 and one of Soberana Plus, for which they took into account the importance of presenting the organism’s immune system with different forms of the antigen. This was a very advanced idea that produced concrete results, and today has become a reality.