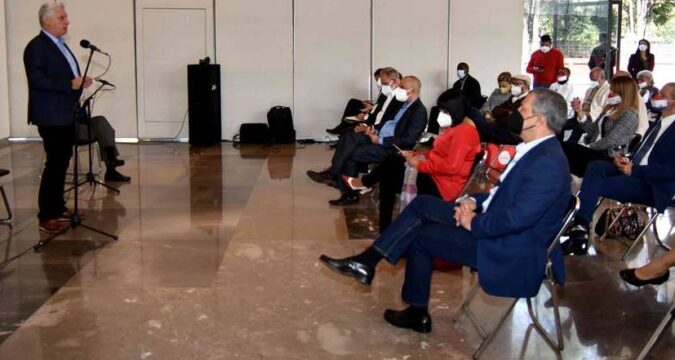 Miguel Diaz-Canel, first secretary of the Central Committee of the Communist Party of Cuba and president of the country, met today with a group of Cubans living in Mexico, where he arrived in an official visit on Thursday.

According to the Twitter of the Presidency, in the meeting, where they talked about solidarity and love for Cuba, the head of state assured that the commitment to hold the 4th Conference of the Nation and Emigration in Havana is maintained.

In this regard, Anayansi Rodriguez, Cuban deputy minister of foreign affairs, highlighted on the same digital media the exchange between the president and his fellow countrymen in Mexico took place at the Cuban embassy to that country.

«Emotional and patriotic exchange between Cubans who love their homeland, build, work, build bridges and put their hearts into Cuba,» she tweeted.

She added that outside the venue several people showed their support to the Homeland, whom she thanked.

Rodriguez accompanied his message with images showing posters welcoming Diaz-Canel to that country, another one demanding the elimination of the U.S. blockade of Cuba, and images of Fidel Castro.

The Cuban president is currently on an official visit to Mexico, which will last until tomorrow, when he will participate at the 6th Summit of the Community of Latin American and Caribbean States.