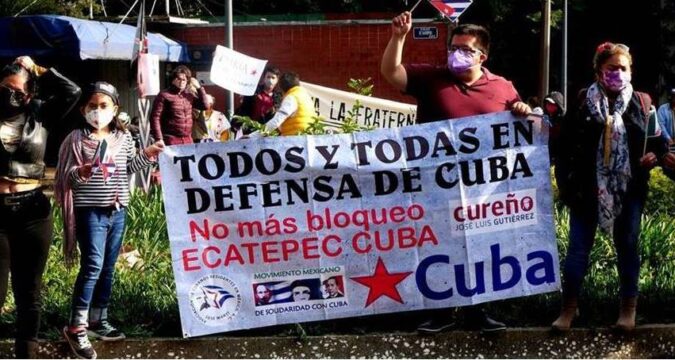 The first vice-president of the Cuban Friendship Institute (ICAP) Noemi Rabaza described the US economic, commercial and financial blockade of Cuba as a crime against humanity.

During an online forum, the official denounced the cruel and inhumane US policy by calling it the most flagrant violation of the Cuban people’s human rights and the main obstacle to the nation’s development.

Rabaza said that the United States, in a deliberate, opportunistic, criminal and immoral manner, is using the restrictions imposed by the blockade and the impact by the COVID-19 pandemic to cause major difficulties to the Cuban people.

The official also rejected the presentation, discussion and adoption by the European Parliament of a new resolution against Cuba which, she said, constitutes open interference with the internal affairs of the Caribbean country.

By adopting such anti-Cuba move, the European Parliament joins the US political, economic and communicational aggression against Cuba, said the official and added that the European legislative body is again supporting the current multi-dimensional war on Cuba.

According to the ICAP website, the official also thanked the gestures of international friendship and solidarity and called on the friends of Cuba to keep alert and mobilize to denounce the US blockade, the aggression, anti-Cuba campaigns and media terrorism which are part and parcel of the non-conventional war unleashed against Cuba.

September 7, President Joseph Biden signed another extension of the Trading with the Enemy Act, one of the statutes that sustain the U.S. blockade of Cuba.

September 7, U.S. President Joseph Biden signed another one-year extension of the Trading with the Enemy Act, one of the statutes that sustain the economic, commercial and financial blockade of Cuba.

According to Russia Today, the memorandum signed by Biden states, «The continuation of the exercise of these authorities with respect to Cuba for one year is in the national interest of the United States,» and sets September 14, 2022, as the date for a new review.

The repeated prolongation of the blockade reflects the U.S. government’s total disregard for the world community’s opposition, expressed annually at the UN, to this genocidal policy which has been opportunistically intensified during the COVID-19 epidemic, in an attempt to subjugate the Cuban people via hunger, disease and misery.