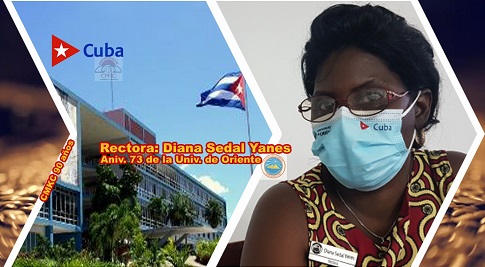 For the second time, the University of Oriente (UO) of Santiago de Cuba is positioned among the top 100 in Latin America, according to the 2023 edition of the QS World University Rankings Latin America, and remains as the second among Cuban universities. This status gives prestige to the Eastern House of Higher Studies, which is currently celebrating its 75th anniversary of its foundation.

This international positioning is endorsed by dissimilar indicators that give credence to such prestigious category, such as: the condition of Excellence granted by the National Accreditation Board in 2018, the results in the vice-rectorate of research, whose essence is the training of professionals and the international relations it has with more than 246 collaboration agreements in force with 42 countries in America, Europe, Africa and Asia.

Institutional recognition is also given by the relevance of the staff, its capacity and responsibility in the university process both nationally and internationally, presence of scientific publications in databases of worldwide prestige, greater number of doctors, masters and specialists and the student-teacher relationship, with students from the Ciego de Avila to the Guantanamo provinces.

For Cuba, the province and the people of Santiago, it is a source of great pride that their Alma Mater is among the first 100 in Latin America, out of a total of 300; at the same time, it is a challenge for professors and students to maintain this status based on the quality management of university processes.

On October 10, the UO will celebrate its 75th anniversary with an extensive program of activities, including the presentation of the printed book «Universidad de Oriente, its buildings and patrimonial spaces», on the occasion of the first anniversary of its declaration as a National Monument.

The day will also include the recognition of retired workers, founders, personalities and institutions; the awarding of the Special Teaching Category and the 75th Anniversary Commemorative Plaque; the cancellation of the commemorative postage stamp in honor of the date; the broadcasting of the television program «Mesa Redonda» at the UO headquarters, the launching of the 75th Anniversary Rum and the central rally at the monument to the University Martyrs.

University of Oriente. Center for higher studies in the province of Santiago de Cuba. Founded on October 10, 1947, the second center of Higher Education created in the country, and the first in the eastern region. In 1976, it multiplies quantitatively and qualitatively in the eastern provinces, in such a way that it is considered the mother university of the territory. Its greatest development was achieved in 2002, when the Universalization of Higher Education began in all the municipalities of the province of Santiago de Cuba. It belongs to the Ministry of Higher Education.

The University preserves, promotes and develops the culture, confirming its status as a sexagenarian university, through the constant search for excellence in the integral training of students, in scientific research and its application, in the improvement of professionals and leaders and in extension, in accordance with international demands and national and territorial priorities, inserting ourselves in society with the relevance and impact that is demanded nowadays.

To fulfill this mission, Universidad de Oriente has 1159 full-time and 2180 part-time professors. In total, there are 5180 workers. The center has 2 campuses. At the Antonio Maceo Campus are the departments of the Faculties of Social Sciences, Humanities, Law, Economics and Business, Natural Sciences, Mathematics and Computer Science, and Distance Education. At the Julio Antonio Mella Campus, the departments of Chemical Engineering, Mechanical Engineering, Electrical Engineering and Construction are located. Work is currently being organized with a view to creating a new campus: Frank País, in the former School for the Formation of Social Workers.