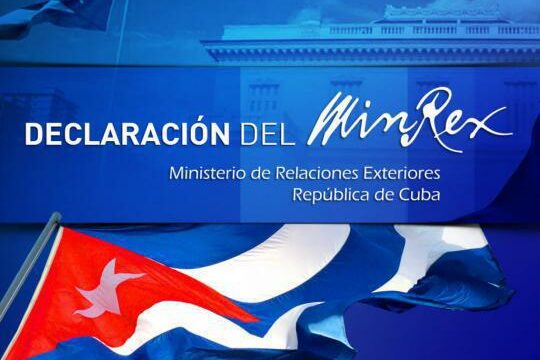 Havana, October 4, 2022.- The Government of Colombia derogated the INTERPOL warrants of arrest as well as the notes of international requests for cooperation and alerts issued against the members of the Peace Delegation of the National Liberation Army (ELN, by its Spanish acronym) and cancelled the requests made to Cuba for the extradition of the members of said delegation who were stayed in our country.

In the light of this new situation, the members of the ELN Peace Delegation who were staying in Cuba departed from the national territory by virtue of an agreement reached among the National Government of Colombia, the ELN and the Guarantors from Norway, Venezuela and Cuba.

As is known, on January 18, 2019, the Government of Colombia publicly announced its decision to terminate the Peace Talks between the Colombian Government and the ELN, which were being held in Havana, Cuba, at the request of the then President Juan Manuel Santos, the ELN and other international actors.

From that very moment, Cuba appealed to the Government of Colombia and the ELN so that they would take all relevant steps to ensure the implementation of the provision related to the “Established Protocol in the Event of a Breakdown of Peace Talks Negotiations between the Colombian Government and the ELN”, which was signed in the context of the peace negotiations by the Government of Colombia, the ELN and the Guarantor Countries on April 5, 2016.

Said protocol states that, “should there be a breakdown of peace talks, the Countries and Parties will have a term of 15 days as from its announcement to plan for and make effective the return of the ELN delegation members to Colombia.”

Forty five months have gone by since the moment when the agreement should have been implemented.

In relation to the permanence of the ELN Peace Delegation in Cuba, the former Colombian government carried out hostile actions against Cuba by means of an ungrateful and politically motivated manipulation of Cuba’s contribution to peace in Colombia.  It ignored the Breakdown Protocol, in open disregard for and infringement of the commitments entered into by that State with the other six signatory nations.

The steps taken by the former Colombian government in connivance with anti-Cuban groups in the United States, provided the pretexts to serve the purposes of Trump’s administration to tighten the economic, commercial and financial blockade against Cuba as well as Cuba’s illegal designation as a State Sponsor of Terrorism, thus bringing about huge costs and   serious humanitarian consequences to the Cuban people.

Cuba acted in strict compliance with its condition as Guarantor and Alternative Venue, in an impartial, responsible, professional and discreet way, in the interest of finding a political solution to the conflict in Colombia and achieving the peace longed-for by its people.

With the enforcement of the Breakdown Protocol, the agreement reached between the Parties and with the Guarantors is therefore complied with, thus confirming that Cuba’s principled position in observance of International Law was only right.

Cuba likewise supports the announcement made today in Caracas by representatives of the Colombian Government and the ELN, in the presence of the Guarantors from Venezuela, Norway, Cuba and special guests, that peace talks will be resumed  within the next few weeks.

Cuba reiterates its determination to act in this process by strictly observing consent and the specific agreements achieved between the Government of Colombia and the ELN, based on the official requests received from both.

The Ministry of Foreign Affairs of the Republic of Cuba reiterates that Cuba will continue to support and contribute, together with the Guarantor Countries, to the negotiations with the ELN, which it considers as an opportunity; and reiterates its strong belief that the Colombian people deserve peace and will find the ways and means to achieve it.