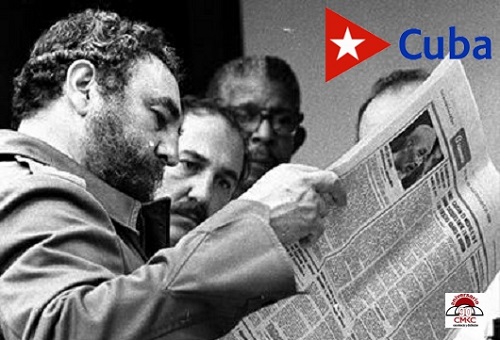 By: Santiago Romero Chang
The eternal leader of the Cuban Revolution, Fidel Castro, usually dedicated time to the press: the necessary reflections and the direct and sincere message from the critical and self-critical point of view as he always did. He called the Cuban press on the Internet the Heavy Artillery of the Cuban Revolution.

As of 2007, the CIA considered as a matter of first importance to guarantee Internet access in Cuba, without control of the Government or Cuban telecommunications companies.

As of 2007, the CIA considered as a matter of first importance to guarantee Internet access in Cuba, without control of the Government or Cuban telecommunications companies. Agents and contractors traveled to the island in order to investigate the operation of illegal networks for connection to satellite television and, based on studies carried out in the field, propose how to turn them into internet access networks.

As part of the program, they ordered to put into operation ten BGAN (Broadband Global Area Network) equipment in Cuban territory, which according to their calculations would allow reducing expenses for other activities. The International Republican Institute (IRI) received the guidance to evaluate its budget in this regard and make recommendations to the USAID with long-term perspectives.

One of the aforementioned BGANs was handed over to a CIA agent in Havana to send daily, securely, information on the ability of the Minint and Mincom to detect illegal satellite television connection «antennas». They also required information on the movements of the FAR troops in certain regions of the country and the characterization of leaders and cadres of the Revolution.

The BGAN allowed the establishment of illegal communication networks for the transmission of data that would link its agent with cell phones and laptops in different parts of Havana.

The CIA needed information and, as they do in countless countries considered to be of interest to the US Government, they decided to guarantee access to the network of networks, not to facilitate development but to strengthen control, through technological dominance and content, Big Data studies, among others, as well as successfully developing media campaigns against Cuba.

Another element of utmost importance for their plans to dominate the island’s cyberspace and other activities of subversion and espionage, was the carrying out of a survey program, created by the US Government. “This project constitutes a strategic planning tool that can emphasize the attention that the island’s leaders offer to issues that are really important to the population.

The International Republican Institute used different methods to distribute the polls and receive important results about them. He focused on two general audiences:

1- The one on the Island.
2-The United States Government, the international community, implementing partners of its policy and the general public.

IRI’s public opinion research played an important role in the design of its programs. The surveys represented a valuable intellectual capital; however, its true power lay in the effective distribution of audiences based on the information received.

The results of the surveys were discussed behind closed doors with US government officials. At present, they constitute an important source of information for the Internet Operational Group for Subversion in Cuba.