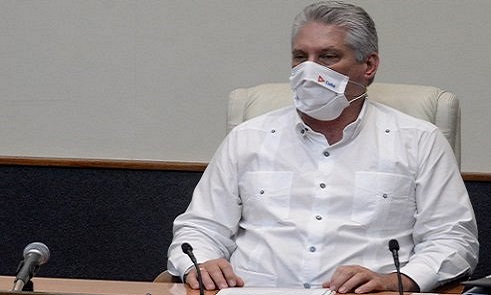 By: Yaima Puig
CMKC, Radio Revolution.- Cuba awoke yesterday, July 20, with the news that many of us have waited four months to hear. Of the 2,914 PCR test samples processed the previous day, none were positive for SARS-COV-2, while no patients in serious or critical condition were reported, nor a single death.

Within this encouraging context, most of the country’s territories – except Havana and Mayabeque – began the transition to the third phase of the first stage of recovery, and President Miguel Díaz-Canel Bermúdez called for continuing to tirelessly and meticulously implement measures to maintain control of the epidemic.

During the afternoon meeting of the prevention and control task force , led by Prime Minister Manuel Marrero Cruz and the President – emphasized was the importance of carefully monitoring the de-escalation of restrictions underway, given the occurrence of new, very serious outbreaks around the world following relaxation of preventative measures.

The President recalled that Sunday, July 20, saw a new record of cases internationally, clear evidence that the disease is not controlled and has not reached its worst moment, thus the importance of not letting our guard down.