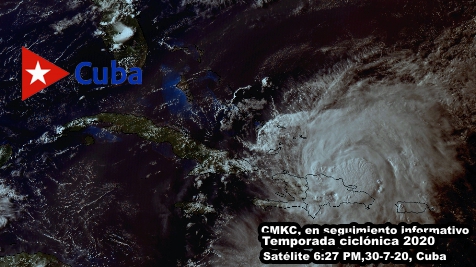 Por: Rosmerys Bernal P.
CMKC, Radio Revolution.- Weather forecasters have concluded that the number of tropical storms this year is likely to break the average record in the Atlantic Ocean and the Caribbean Sea; hence, the season is expected to be more active than usual.

The cyclone or hurricane season in the Northern Atlantic, Caribbean and Gulf of Mexico zone officially began on June 1 and lasts until November 30.

A few days after the season began, three tropical storms were reported: Arthur, Bertha and Cristobal, which is a record number for a season in its early days, Dr. Miriam Teresita Llanes, head of the Weather Forecast Center of Cuba’s Meteorology Institute (INSMET), explained to The Havana Reporter.

Tropical storm Arthur developed on May 16, east of Florida Peninsula, while Bertha formed on May 27 near South Carolina, and Cristobal on June 2, in the warm waters of the Campeche Bay, in the Gulf of Mexico.

An average of 12 tropical cyclones ?that is to say, tropical storms plus hurricanes- normally develop in the Atlantic Basin (the Atlantic Ocean, the Caribbean Sea, and the Gulf of Mexico) during the hurricane season; subtropical events are not included in that number.

As many as 15 tropical storms have been predicted for the Northern Atlantic Basin, eight of which could be rated as hurricanes, Llanes outlined.

Of them, ten are expected to form over the Atlantic Ocean, two over the Caribbean and three over the Gulf of Mexico, she added.

There is an 80 percent likelihood of at least one hurricane developing and getting stronger in the Caribbean and of another formed over the Atlantic area moving toward the Caribbean region. Meanwhile, there is a 60 percent chance of Cuba being hit by one hurricane at least, the expert said.

Cuba is one of the few countries in Latin America that develops its own weather forecasts of the cyclone season, based on statistics and numerical models. However, it is impossible to determine with accuracy where or when one of the expected meteorological events will develop.

The island has 14 Provincial Weather Forecast Centers, 68 conventional stations and eight meteorological radars that allow for early detection of weather events so as to be better prepared for any phenomenon of this kind.

National institutions such as the Forecast Center, the Maritime Surveillance Center and the Atmospheric Physics Research Center also contribute to this effort.