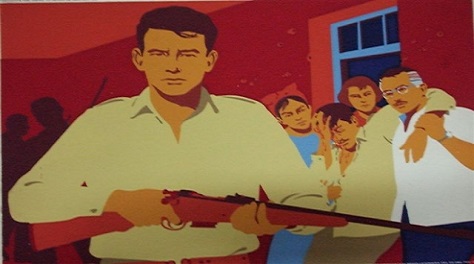 Here we are, not battered, not subjugated, not tired. Scars, yes, there will always be scars, because to conquer rights you must face the bullets, and your skin suffers, and even your soul, but if you survive, as we have done, there is no power on earth that can extinguish the inexhaustible brilliance of a dignified life when you know you are free.

By what right can anyone, whip in hand, order us to our knees, moved by fear or indolence, by the thundering of the vain pride of those who call themselves owners of the air we breathe, of the sky, even of the sun, of the soil watered with the sweat of those who never surrender, who persevere.

Perhaps because they have built a rotten wall from the foundations, do the lords of arrogance imagine that we will no longer look up, that for an instant we will even question our dreams?

History is full of obstacles and none have been able to detain us. Let the walls of the Moncada tell the story – walls that prided themselves on their strength, believing themselves invincible they cradled barbarity and torture in their entrails, witnessed the shedding of young blood at the hands of hired killers, and yet the Revolution advanced triumphantly over that rottenness and buried it forever.

A being with the sick soul of power is capable of many evils; we know this all too well. When arrogance takes root, it grows uncontrollably, deformed. Empires are built by the arrogance of many men, and the machinery they unleash then lives on by itself, and human beings become only the means to an end.

Power blinds, allowing the powerful to believe that everyone, sooner or later, will succumb to its pressure. After all this time, they have not understood that the island that gave birth to the Mambises, to the Centennial Generation, and took these children by the hand and dressed them in olive green, nothing can defeat us. The cancer of domination has spread; they are incapable of thinking.

Here we are, yes. So said those insurgents, as we now say, as our children say, and generations to come will say. Here we are, eternal rebels, preventing the hatred of our enemies from diminishing us. Because this is what the life of the revolutionaries demands in a world divided and marked by inequality, every morning is for us a St. Anne’s Day.

With our dead – alive – in our hearts, with their will tattooed on our skin, with their drive running like blood through our veins, facing infinite challenges and fully aware of the harshness of our times, we maintain what they, the saviors of Martí always had: certainty of the justice of the work defended, and the conviction that victory belongs only to those who are able to sacrifice, struggle, and triumph.