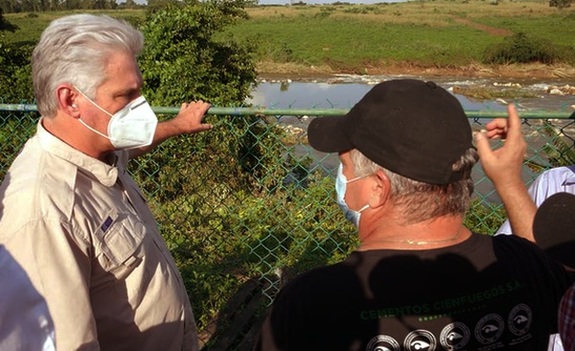 According to the Twitter account of the Presidency, several members of the Council of Ministers also accompany the president, in order to assess the damage caused by the meteorological event and the measures adopted in each territory for recovery.

The day before, the prime minister participated in Ciego de Avila in a meeting with the Provincial Defense Council of that central province, where he was interested in the progress of recovery.

The head of government urged to look for alternatives and drainage mechanisms to prevent future flooding of rivers and streams from significantly damaging crops and nearby communities.

Precisely the damage to the agricultural sector is one of the fundamental consequences left by Eta, with some 800 hectares of plantain affected, in addition to cassava, sweet potato, pumpkin and corn, and the loss of tobacco seed beds.

The tropical storm also caused damages to 287 houses, nine of which nine totally collapsed and the rest partially, expected to be recovered in the rest of the year.

Tropical Storm Eta hit the country last weekend and until Tuesday left heavy rains in several regions, mainly in the center and the extreme west of the Caribbean island.