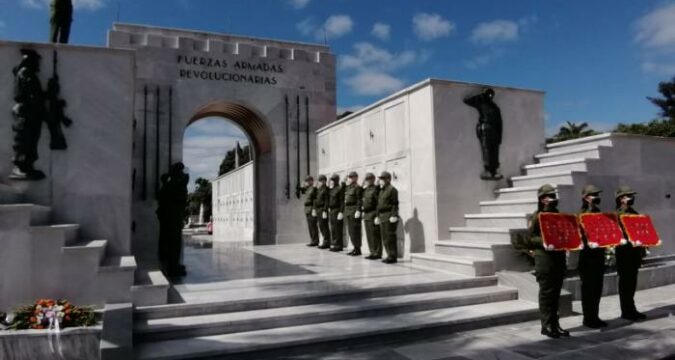 Floral Tributes- Army General Raúl Castro Ruz, first secretary of the Party Central Committee, and President of the Republic Miguel Díaz-Canel Bermúdez sent floral wreaths to Havana’s Colon Cemetery yesterday to honor the five crew members who died in an accident on the morning of January 29. The helicopter in which they were traveling from the province of Holguin to Guantanamo crashed into a hillside.

Floral Tributes- Three Revolutionary Armed Forces (FAR) lieutenant colonels, Ernesto Verdecia Diaz, Luis Miguel Gonzalez and Nivaldo Garcia Herrera were laid to rest alongside heroes, martyrs and combatants who also fell in defense of the homeland, with FAR and Ministry of the Interior leaders on hand, as well as other compañeros.

Floral tributes from the Ministry of the Revolutionary Armed Forces, the Association of Combatants of the Cuban Revolution, relatives and friends were also delivered to the ceremonies.

Cuba’s Revolutionary Armed Forces vs COVID-19:
The people who save the people (april 14, 2020)
The face mask prevents me from seeing her face clearly, but I don’t really need to. As she speaks, the gleam in her eyes denotes the tranquility of someone who places her duty above all else, and her words confirm this.

«I’m from Guantanamo. Although I’m far from my three-year-old daughter at the moment, I continue my preventative work to ensure that everyone who must necessarily walk the streets is abiding by measures to combat the new coronavirus,» said Second Lieutenant Maviannis Viquillón Fajardo, a member of the Revolutionary Armed Forces (FAR) Prevention Brigade in Havana.

Young people like Maviannis complete a circuit through the city several times a day, along with members of Special Troops Regiment in the Havana military region, with the mission of contributing to the implementation of measures adopted to contain the COVID-19 epidemic.

Capital city resident Yosumi Plana Trenche, who witnessed the work of the FAR members, stressed the importance of the work of the prevention teams raising the level of awareness among those who, like him, must necessarily leave the safety of their homes and go out onto the streets.

His words of gratitude were repeated by others interviewed, who recognized the positive impact of these and other preventive actions being taken by the Cuban government to combat the deadly virus and protect of the population.

In this regard, Colonel Daniel Sagó Rivera, the brigade’s chief of staff, explained that this joint work consists of street surveillance and patrol services, with a view toward preventing the presence of children and older adults on the streets, reminding pedestrians that wearing a face mask is obligatory, as is maintaining a two-meter distance from others in queues at stores.

The importance of their work was evident in the municipality of Plaza de la Revolución, where crowds of people continue shop, some without face masks. These soldiers and officers were busy reminding them of the danger of the disease, attempting to convince them to comply with emergency regulations through persuasion and dialogue.

«The success of these measures lies not only in the responsibility of the authorities to enforce them, although it contributes significantly to that effort. Our work only ends when the population becomes truly aware of the risk this new coronavirus poses to their health and that of their families,» the officer insisted.

Colonel Sagó also noted the confidence that the country’s leadership has placed in these young soldiers, most of whom are completing their active military service.

«We ask the population to have confidence in them, because right now they are the protagonists of these efforts and are committed to doing the job well. They understand the necessity of conversing with people respectfully, and reminding them that that the measures safeguard us all.»

A face that exemplifies Sagó’s argument is that of Corporal Reyder Rodríguez Huerta, who, at only 19 years of age, feels prepared to assume such an important mission. He has the training, which he has received daily during his military service; the support of his family; and the desire to be useful to his country.

Like Maviannis Viquillón, Rodríguez insisted that this is the most important mission now. Going out onto the streets – persuading the capital’s people to take the necessary care in confronting the COVID-19 pandemic – has become his way of serving the country, without expecting any recognition.

The work being carried out by the FAR’s special prevention troops led by young people like Reyder Rodríguez and Maviannis Viquillón, is underway across the entire nation, with the objective of preserving the well-being of all.