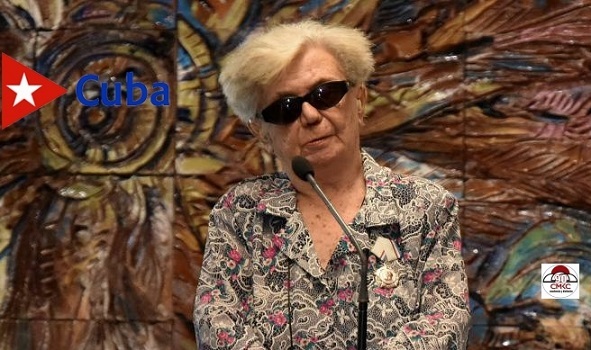 «I accept this decoration, which is beyond me, with the commitment to continue fighting as long as I breathe.» With these unrehearsed words, the prestigious intellectual Graziella Pogolotti Jacobson expressed herself, yesterday afternoon after the President of the Republic, Miguel Díaz-Canel Bermúdez, awarded her the José Martí Order, the highest distinction granted by Cuba.

The teacher of many generations spoke of the decoration’s magnitude, not only because it bears the name of Martí, but also given»the dimension of the work done by the many who have received it previously.»

In the Sierra Maestra with Fidel

In her comments, Graziella Pogolotti said that she always wanted to be a teacher, and “Despite not having any ties to the Moncada, I belonged to the generation that did not want the Apostle to die in the year of his centenary, when the neocolonial Republic was bogged down in a definitive structural crisis, subjugated by the Batista dictatorship and mired in dependence and underdevelopment.

«The road has not been easy,” she added, and compared the Revolution’s saga to a symbol on a Cuban poster “The Rose and the Thorn,” designed in 1967 by Alfredo Rostgaard for the First International Protest Song Conference, «The beautiful rose is on a stem that has a thorn, from which a drop of blood, as red as the flower above, falls.»

«Even in the hardest circumstances, we have always overcome the difficulties,» Pogolotti emphasized, recalling, as well, her work with Armando Hart, when the Ministry of Culture was established, and the 1990s, when intellectuals stood firm despite the material limitations, engaged in dialogue with Fidel, not seeking privileges, but rather to put social problems, cultural problems, on the country’s agenda.

Speaking before the decoration ceremony, Abel Prieto stated, «Today is a day of joy and pride for Cuban culture and all of Cuba. We have gathered here to pay tribute to one of our essential figures: Dr. Graziella Pogolotti.”