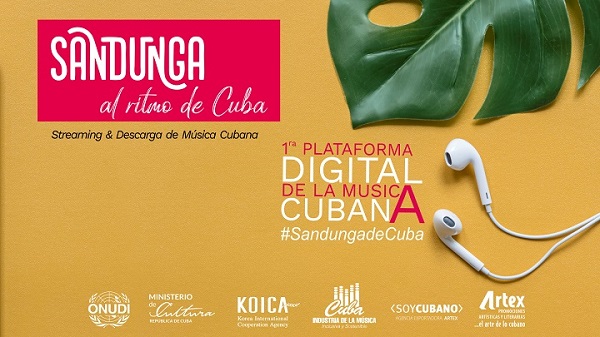 Political culture and the culture of doing politics

During the first trial stage, expected to conclude April 15, the platform will be available at www.sandunga.cu, and also through an android apk.

ARTEX company is hard at work to offer a robust product which consolidates itself by the month of May when Cubans will hold the music festival CUBADISCO 2021, said the executive.

Its recording catalog has over 700 pieces and an editorial catalog of over 660 musical pieces from the most traditional to the most contemporary creative tendencies in Cuban music.

The agency has been betting on digital sales since 2015 and has placed the majority of its production on commercial online platforms such as iTunes, Amazon, YouTube, Spotify, Deezer and Cubamusic (online store specialized on Cuban music).

CLAVE CUBANA is the agency which represents and promotes small and large format popular Cuban music bands and their performances and shows.

MUSICALIA is the agency which represents and promotes small and large format popular Cuban music bands and their performances and shows.

On his official Twitter account, the official referred to the inauguration of its digital musical platform Sandunga, where users can download music produced by the recording houses Colibri, Bis Music, EGREM and Abdala.

Also on Twitter, Casa de las Americas President Abel Prieto and the Union of Artists and Writers of Cuba (UNEAC) sent congratulatory messages to the workers of Artex S.A. in all provinces.

The premiere of the musical theme ‘La fuerza de un pais’ (The Strength of a Country), a tribute to scientists by the Buena Fe group, will take place on Tuesday on Havana Radio at 7:00 p.m. local time.

From the radio station of the Office of the Historian of the City of Havana, the song will pay tribute to the Cuban researchers who are working on five vaccine candidates against the SARS-CoV-2 virus, two of them already in phase III.

After several weeks of production, the group led by musician Israel Rojas released the lyrics on March 21, and on his Twitter profile Cuban President Miguel Diaz-Canel Bermudez acknowledged the ‘ennobling lyrics’ composed by Rojas.

During the premiere of the song, which can also be listened to in real time through the website www.habanaradio.cu, the singer-songwriter will be accompanied by three scientists directly linked to Cuban vaccine research.