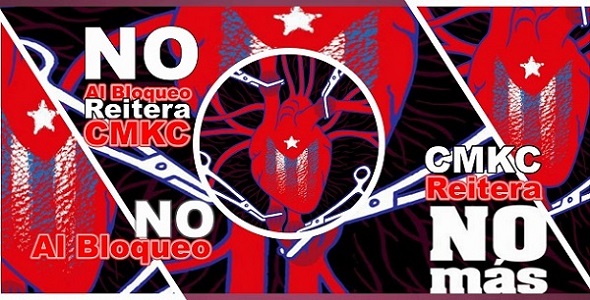 U.S. blockade. The United States has maintained a cruel and inhumane blockade to Cuba for 59 years. In March, caravans and protests against the blockade were held in more than 50 cities around the world, including in the U.S., demanding an end to this obsolete and unjust policy against the Caribbean island.

Blockade- Now, with the new Democratic administration of President Joe Biden, there is an international clamor to return to the process of normalization of relations between the United States and Cuba, initiated by President Barack Obama, and to lift the atrocious unilateral blockade which has not only failed in its objective of suffocating and destroying the Cuban Revolution, but it has also revealed Washington’s ruthless bullying.

Lift the blockade, it is also a virus

Cuban authorities estimate that the U.S. blockade causes more than $4 billion in economic losses to Cuba each year and has caused nearly $800 billion in major damage to the island since its implementation. And the damage is not just to Cuba.

National Patriotic Symbols and Attributes of the Republic of Cuba

The U.S. Chamber of Commerce has warned that sanctions against Cuba cause multi-billion dollar losses for U.S. for the ban on trading and exchanging with the Caribbean island. Not to mention the consequences of restricting the freedom of 363 million Americans and violating their constitutional right to free transit, as they are not allowed traveling to Cuba as part of the blockade.

In a year of global pandemic, these sanctions prove to be even more cruel, unjust and debilitating. For decades, the blockade on Cuba has hindered the acquisition of medicines and medical and sanitary equipment, endangering the lives and health of millions of Cubans. In the midst of the pandemic, this situation has worsened because it limits the ease of acquiring personal protective equipment and all the other necessary commodities to fight a virus with a high rate of hospitalization and fatalities.

However, despite this reality, Cuba is not the country that has been mostly affected by Covid-19. Ironically, it is its neighbor and bully from the north, the United States, that has suffered the most infections in the world (more than 30 million) and the most deaths from the virus.

Cuba denounces telecommunications aggression from US

While the United States is mourning more than 530,000 deaths over the last year due to Covid-19, and still recovering from the huge economic losses resulting from closures and quarantines, Cuba has managed to maintain a low rate of infections, hospitalizations and fatalities. According to official figures from Cuban authorities, as of March 2021, Cuba had recorded fewer than 70,000 infections and 408 deaths since the start of the pandemic.

Cuban residents in South Africa to condemn US blockade

During Donald Trump’s presidency, the blockade against Cuba was tightened and all the progress achieved by the Obama Administration was erased. Trump implemented 240 new sanctions and punitive measures against Cuba during his administration, including 50 additional measures during the pandemic that directly impacted the health sector on the island, causing damages in excess of $200 million.

Trump even placed Cuba back on the U.S. list of ‘sponsor of terrorism’ countries, simply to punish it. The island did what it has always done: innovate, progress, share, show solidarity and collaborate.

Even with all these obstacles and hostilities, Cuba sent 57 brigades of medical specialists to 40 countries around the world, providing free medical care to more than 1.26 million patients suffering from Covid-19, mainly in poor and developing nations. But, that’s not all Cuba did to help the world during this difficult period of much suffering and collective uncertainty.

Cuba launched an offensive against the pandemic with the same strength, commitment, persistence and solidarity with which it has fought the U.S. blockade. In Cuba, the public health system, managed at the community level, was mobilized to make daily home visits to detect and treat cases of Covid-19 and prevent its spread.

Cuba’s advanced scientific research sector (despite the U.S. blockade) quickly began to develop and produce new treatments for patients as well as vaccines. Cuba’s goal is not only to serve its population with these treatments and vaccines, but to share them with the world.

In return, the United States and several European countries are actively hoarding the few Covid-19 vaccines that have been officially approved by WHO and multiple testing processes in dozens of nations. Big Pharma in the U.S. is also exerting pressure on the Biden administration to block access to patents for vaccines and punish other countries that attempt to reproduce and use them to vaccinate their populations.

The small island is a world leader in biotechnology. It has invested a lot in science and technology, and has prioritized human welfare over money and profit. It is this absence of capitalism and greed that has driven Cuba’s boundless innovation.

Several vaccines are being developed in Cuba, of which two -Soberana 2 and Abdala- have advanced to phase III clinical trials. There are only 23 vaccines in the world, among more than 200 being developed that have managed to advance to this point. And two of them are Cuban.

No other Latin American country has developed its own vaccines so far, only Cuba. The country under attack and beaten by the most powerful power on the planet is overcoming, is progressing and is doing so in the name of compassion, solidarity, freedom, life and humanity.

Even the Washington Post has had to admit that Cuba is on the verge of the historic achievement of becoming the smallest country in the world to develop multiple effective vaccines against COVID19: «Against all odds, Cuba could become a coronavirus vaccine center.»

Cuba’s intention is to bring its vaccines to the world, free and universal. Their vision is a communal vision of the problem we are all facing. Covid-19 is a common enemy. We must join forces to defeat it together. Any other way would be destined to fail.

What Cuba has achieved so far is amazing, especially to those who always underestimate its resilience, persistence, innovation, intelligence and will. Without the U.S. blockade, Cuba could have done so much more.

Cuba has been able to accomplish all that during nearly 60 years of the U.S. blockade, imagine what its contributions to humanity and a better world would be like if the blockade did not exist?