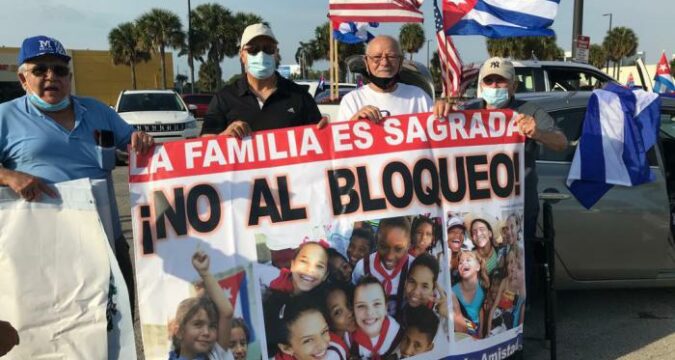 No more blockade against Cuba! Next June 23rd Cuba will submit for consideration of the United Nations General Assembly (UNGA) the report Necessity of ending the economic, commercial and financial blockade imposed by the United States of America against Cuba, according to Bruno Rodríguez Parrilla, member of the Party politburo and Minister of Foreign Affairs, on his Twitter account this Thursday.

The First Secretary of the Party and President of the Republic, Miguel Díaz-Canel Bermúdez shared on the same social network the message of the Foreign Minister, and asserted that, «if in more than six decades that cruel policy has caused shortages to the Cuban family, in the last year, in the midst of the pandemic, it has definitely tried to suffocate us».

In his tweet, Rodríguez Parrilla affirmed that a superpower harasses a small island, and forces it to fight against a terrible pandemic and against a blockade that inflict human and economic damages. «Like the virus that causes this pandemic, the U.S. blockade suffocates and damages the Cuban family,» he sentenced.

According to the report that Cuba will present at the UNGA, the accumulated general damages caused by the application of the unilateral aggression amount, at current prices, to 144,413.4 million dollars. Taking into account the depreciation of the dollar against the value of gold on the international market, the blockade has caused quantifiable damages of more than one trillion 98 008 million dollars.

During the period characterized by the social and economic backwardness of the covid-19 pandemic, the numerous regulations and provisions issued by the US government against Cuba to reinforce the economic blockade reached unprecedented levels of hostility, thus adding up to a total of 243 sanctions imposed against our nation by the administration of former President Donald Trump.

Only linked to the deprivations to face the deadly disease caused by sars-cov-2, the illegal sanctions policy has prevented the Cuban people from acquiring mechanical pulmonary ventilators, masks, diagnostic kits, protective glasses, suits, gloves, reagents and other supplies necessary for the management of the condition.

The economic, commercial and financial blockade imposed by the United States against Cuba for the last 50 years is the longest in the history of mankind. It is the highest expression of a cruel and inhuman policy, lacking in legality and legitimacy and deliberately designed to provoke hunger, disease and desperation among the Cuban population.

The Government of the United States, far from putting an end to the economic, commercial and financial blockade it imposed against the Republic of Cuba, has kept in force the laws, provisions and practices that support it. It has continued to strengthen the political, administrative and repressive mechanisms for its more effective and deliberate implementation.

In the presentation of the Central Report of the 8th Party Congress, Army General Raul Castro described the US blockade as «the most comprehensive, unequal and prolonged economic war that has ever been unleashed against any nation».

The elected First Secretary of the Central Committee of the Party, the President of the Republic, Miguel Díaz-Canel Bermúdez, in closing the event, stressed that no one, with a minimum of honesty and with economic data that are in the public domain, can ignore that this siege constitutes the main obstacle to the development of our country, and to advance in the search for well-being and prosperity.

Arsenio Arocha Elías, deputy director of Cubana de Aviación, highlighted that, since 2019, the cancellation of lease contracts caused the indefinite closedown of sales in several markets, and the interruption of negotiations for the opening of the Jamaica destination, causing monetary affectations and an increase in the deterioration of the company’s image.

He said that the impossibility of making transfers to and from Cuba limits the financial flow of the country’s flagship carrier, with a negative impact estimated at more than 353 million dollars, in addition to continuing problems in gaining access to international commercial platforms.

He added that income from exports of goods and services on direct routes to and from the U.S. in cargo transportation was lost -mainly non-commercial cargo existing in that country- amounting to more than five million dollars.