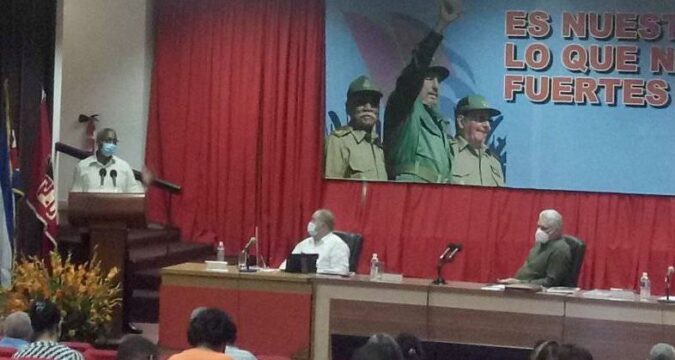 The Communist Party of Cuba Central Committee Secretariat, led by its First Secretary and President of the Republic Miguel Díaz-Canel Bermúdez, hold meetings across the country to promote implementation of plans approved at the Congress.

The Communist Party of Cuba Central Committee Secretariat, led by its First Secretary and President of the Republic Miguel Díaz-Canel Bermúdez, held a series of meetings across the country to promote implementation of plans approved at the organization’s Eighth Congress.

These took place between May 27 and June 25, and were guided by a document entitled “Ideas, Concepts and Guidelines of the 8th Party Congress,” which was examined and approved by the Political Bureau on May 22, and served as the central axis of discussion in meetings held by the country’s leadership with some 2,600 Party members across the nation.

The text summarizes key concepts presented by General Raul Castro Ruz in the Central Report, the closing speech by the current First Secretary, and documents approved by the three 8th Congress commissions. Also included is the agreed-upon update of Policy Guidelines, a document which, along with the National Plan for Economic and Social Development through 2030 and the Economic and Social Strategy, constitutes the core of the Cuban Revolution’s current work, in addition to the Constitution of the Republic approved in a 2019 national referendum.

Following the Secretariat’s meetings with territorial leaders to establish fundamental lines of work – summarized below – contributions and debates will continue this month in the Central Committee and Council of Ministers, as well as within leadership bodies of mass organizations, the Young Communists League and the National Assembly of People’s Power, Díaz-Canel explained, with a view toward ensuring “the collective implementation of the Congress, and establishing a work system that supports the fulfillment of its precepts by all grassroots organizations.»

-More effectively support new economic and social model. The Communist Party must, in an organized manner, alongside the people, guarantee historical continuity.

-Debate in local units everything that can contribute to development, through the execution of a correct cadre policy, as a guarantee of the continuity of the Revolution.

-Get things done, but make sure to communicate well. Social communication must be timely and accompany in a precise manner all actions taken.

-Maintain ties with the masses, increase militancy and intransigence.

-Encourage the participation of youth, strengthen the work of their grassroots organizations, and ensure that Party members’ agenda coincides with the public agenda.

-Feel the need, as the vanguard Party, to immediately analyze any problem or concern that arises, resolve it or find a solution in collaboration with responsible authorities.

-Convert into concrete results the ideas, concepts and guidelines of the Party Congress.

-Maintain the authority of the Party on the basis of the prestige gained through our work, confronting the country’s problems together with the people.

-Revitalize popular mobilization; promote the use of science and innovation, the computerization of all processes, and social communication as pillars of the Party’s work.

-Expand interaction with scientists and experts who can contribute to agricultural activity, especially in identifying exportable items and increasing food production, to avoid importing what we can produce here, one of the country’s strategic issues.

-Within mass organizations like the Federation of Cuban Women and Committees for the Defense of the Revolution, generate debate and assume leadership in addressing vital issues, including gender violence, the role of the family and social equity, while unleashing the untapped potential existing on every block, accompanied by the impetus of youth.

-Pay attention to expanding livestock ranching, the sowing of animal feed, control of land use and the appropriate exploitation of land under irrigation.

-Mobilize the Party’s moral authority, the legacy of the historical generation, in the immediate solution of the country’s problems, because this is what the people expect. We must achieve, first of all, the availability of food, which we can produce here.

-Depend on our own efforts and talent; and in the ideological battle we must provide forceful, intelligent answers, far removed from vulgarity and hatred, but with firmness. Adversity cannot stop us, or discourage us.

-Assume responsibility for growth in the Party ranks as the most important organizational process, based on the exemplarity of our members, recognizing meritorious revolutionary citizens before the society.

-Maintain as our fundamental objectives the happiness and welfare of the people in everything we do, both ideologically and economically, as the essence of socialism.

-Evaluate local potential for the creation of micro, medium and small enterprises, as new economic actors to create jobs and production chains to give more value to raw materials, actions which should be encouraged by the Party as part of its role in the economic battle, monetary re-ordering and the development strategy.

-Dynamize the economic strategy and coordinate efforts to expand food production, reduce imports, increase exports, use agro-ecological and scientific techniques to replace fertilizers and other expensive inputs purchased on the international market.

-Mobilize thinking with a view toward containing COVID-19 outbreaks, to allow for summer activities.

-Ensure that cadres speak from the heart to the people, and are distinguished by their revolutionary dissatisfaction and sensitivity to the problems of the Revolution. Their discourse, orientations and dialogue must be connected to the demands and problems of the population.

-Avoid bureaucratism and routine in Party work at the grassroots level, appealing to the people to participate in the principal tasks and, with special emphasis, promote the work of mass organizations, which are obliged to revitalize their activity, letting nothing that affects the community be alien to them.

-Make local units vibrant spaces where all members feel committed and eager to engage in honest, profound, enriching debate, to find solutions to problems with the participation of the membership and the rest of the population.

-Always keep the truth as a premise in approaching Party work, at any level, no matter how hard it may be, as Fidel taught us. No matter how harsh the discussion, the first place it must occur is in the local unit, among members.

-Ensure that work to expand the Party ranks is dynamic, creative and that membership serves as a stimulus for youth and their families. We must ensure that members feel proud of belonging to the Party.

-Consolidate the role of the Party in the agricultural sector, vital to promoting our food and nutritional sovereignty plan and municipal self-sufficiency.

-Increase ties between Party leaders and local units, and based on this close relationship, learn and stay informed of essential issues, take the country’s pulse. This connection allows us to later make analyses to confront and solve problems.

-Defend, in the work of cadres, the use of language that is on a par with that of who resist on a daily basis, in factories, at construction sites, polyclinics, doctor’s offices, schools, and fields, ensuring that institutional discourse matches the people’s agenda.

-Ensure that members of the Young Communists League go on to join the Party ranks, a step that must be understood as a natural transition, in accordance with the political commitment of each individual.

-Expand, with the Party at the forefront, the creative resistance of the people on all work fronts, demolishing obstacles, and brushing aside bureaucracy that slows development.

-Strengthen measures to control COVID-19, which, combined with vaccination, will make it possible to protect human life and reactivate the economy.

-Continue denouncing the blockade, which prevents us from receiving foreign currency and credits, and do so with concrete examples of its impact.

-Communicate our truths; work in communities and neighborhoods, to assist the most vulnerable.

-Explain that monetary reordering is being blamed for problems that were going to be present with or without the changes. Shortages are a result of the blockade, more than anything else; and shortages lead to inflation.

-Root out everything that causes division and promote unity in all we do. Political and ideological subversion is designed to discredit the Revolution and divide us.

-Confront abusive, speculative prices effectively at the local level, in municipalities, independently of measures adopted at the national level.

-Strengthen the performance of grassroots organizations, which should help to create a favorable environment for sincere, honest and productive debate, avoiding superficiality and routine responses in the analysis of problems.

-Consolidate the internal life of local units, as a dynamic force in completing tasks everywhere. This can be achieved by general secretaries who are distinguished by their preparation and leadership capacity, not only their human qualities.

-Promote mass organizations’ leadership in all community activity, fully aware that it is not possible to continue doing things in the same way to consolidate an atmosphere of unity and collective contribution.

-Perfect ways of acting, controlling and demanding in a context that is not at all similar to previous moments of the Cuban revolutionary process.

-Consolidate every achievement in agro-food activity, resist setbacks, eliminate conformity, reject vacuous explanations and justifications, and promote new motivations and the desire to get things done, among cadres and workers.

-Bring to life what is written in the Economic and Social Development Plan, direct economic actors toward local development and remove whatever hinders the advance of productive forces.

-Conduct ongoing debate with youth, providing them the space they deserve and have earned, facilitating their participation in all decisive tasks.

-Make up for delays in spring planting and prioritize attention to the recovery of sugar cane.

-Struggle with the concept in mind that we are not only going to survive, and are not only resisting, but resisting, as we have done in other moments, in a creative way, which means resisting, but at the same time continuing to advance, without stopping and without renouncing prosperity in our country, as we have projected in our vision of the construction of socialism.

-Ensure that all technical-economic objectives of agro-food programs are met, specifically the production of nickel and its export, and increase the processing and export of zeolite.

-Continue improvement of tourist facilities and the extra-hotel network.

-Create the necessary conditions to ensure the opening of the high tourist season, should the pandemic situation allow.

-Ensure the implementation of agreements and guidelines of the Congress through a comprehensive projection, which contemplates the systematic preparation of cadres, the application of science, close links between the Party, the people and mass organizations, as well as regular follow-up of economic activities, encouraging the development of local potential and endogenous resources.

-Strengthen the role of municipalities in developing productive and economic processes with the purpose of not only resisting, but also advancing and improving the population’s quality of life.

-Take the political discussion to the entire membership, to workplaces in the community, to ensure that revolutionaries know the content of the documents that were debated at the Congress, the resolutions approved and the directives that specify where we need to go.

-Keep the Congress alive, making sure that everything that is done has impact in productive centers, among different economic-social actors, mass organizations and the Young Communist League. That work at the community level is marked by the understanding that allows us to perfect our society and advance toward the construction of a more prosperous future and greater happiness for our people.

-Promote the production of oxygen and nitrogen; increase production of corn and beans to satisfy the demand of the largest grain processing plant in the country; accelerate the development of the coffee program and improve attention provided.

-Denounce the economic blockade as the main obstacle to national development, and resist with our own forces and intelligence, reducing imports and increasing exportable items.

-Insist that success will depend on our capacity to defend the work of the Party as the political vanguard, from our local units, as a place for honest and participative debate directed toward finding solutions.