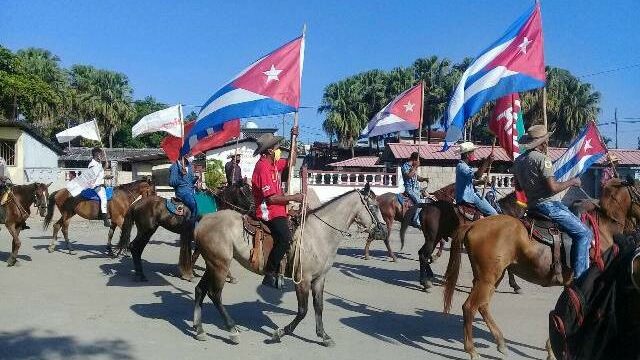 Although investigations into the riots that took place in Cuba last Sunday, July 11th are ongoing, the Attorney General’s Office of the Republic (FGR in Spanish), emphasizes that «some of these behaviors do constitute crimes».

To support its statement, we appeal, in the first place, to the Magna Carta, not only from its superiority as a Law of Laws, but also as a social project, approved by more than 86% of Cubans.

Its Article 1, consecrates «Cuba as a socialist State of law and social justice, democratic, independent and sovereign, organized with all and for the good of all» and, in Article 4, it establishes that «the defense of the socialist homeland is the greatest honor and the supreme duty of every Cuban».

This precept, the prosecutor emphasized, also supports the right of Cubans to fight by all means, including armed struggle, when no other recourse is possible, against anyone who tries to overthrow the political, economic and social order that we have decided to build.

In the review of the constitutional principles that protect the defense of the nation, Article 13 clearly explains the essential purposes of the State, among which are: to maintain and defend the independence, integrity and sovereignty, as well as to preserve national security.

Likewise, Article 45, which refers to the limits that the Supreme Law establishes in the exercise of the rights of the citizens, since many, during the riots of the last few days, raised as an argument «the defense and enforcement of their rights».

It is worth remembering that, according to the constitutional text, «the exercise of people’s rights is only limited by the rights of others, collective security, general welfare, respect for public order, the Constitution and the laws».

Jose Luis Reyes also focused on Article 90, which refers to the responsibilities and duties of citizens, derived from the exercise of their rights and liberties.

In this sense, it mentions, among others, «the duty to have due respect for the authorities and their agents; to respect the rights of others and not to abuse their own; and to act in their relations with other people according to the principles of human solidarity, respect and observance of the rules of social coexistence».

Without resorting to the knowledge of the laws, just by the common sense of the people, it is possible to affirm that the acts in question flagrantly transgressed such limits and duties.

At present, the Prosecutor’s Office carries out the control of the criminal investigation of all proceedings, with strict observance of quality and celerity, the determination of individual responsibility, the personal characteristics of the accused and the concurrent circumstances.

With respect to precautionary measures, preventive detention and provisional imprisonment are preferably used for the most important cases, or those committed by recidivists and multi-recidivists.

Aggravating circumstances of criminal liability are also taken into account, which implies the modification of the minimum and maximum limits of the penalties to be imposed.

Being part of a group of more than three people.

To cause serious consequences with the crime.

Involving the participation of minors.

Taking advantage of the circumstance of a special situation.

To use means that provokes a common danger.

Acting against people or property related to activities prioritized for the economic and social development of the country.

As for the crimes, there are those considered «common», committed against the public order and the administration and jurisdiction, without ignoring others such as crimes against life (injuries), and vandalic acts such as looting of stores.

From these typologies, let us say public disorder, that is, «whoever provokes riots or disturbances in establishments open to the public, public transportation vehicles, social clubs, shows, family or public parties or other events or places attended by numerous people, incurs the penalty of deprivation of freedom from three months to one year or a fine of 100 to 300 quotas or both.

«If the purpose is to alter public order in any way, the sanction is deprivation of freedom from one to three years or a fine of 300 to 1,000 quotas or both».

It also details that concerning the attack: «whoever uses violence or intimidation against an authority, a public official, or his agents or assistants, to prevent them from performing an act proper to their functions, or to demand that they perform it, or for revenge or retaliation for the exercise of these, incurs the penalty of deprivation of liberty from one to three years».

However, if any of the following circumstances concur in the above-mentioned acts: two or more people participate, it is carried out with the use of weapons, it causes bodily harm or health damage of the offended party and the purpose pursued by the agent is achieved, the penalty of deprivation of freedom may be increased from three to eight years.

During the destabilizing acts, the following crimes may also be presumed:

Resistance: Whosoever opposes resistance to an authority, public official or his

agents or assistants in the exercise of their functions, shall be subject to a punishment of deprivation of freedom for a period of from three months to one year or a fine from one hundred to three hundred quotas.

Contempt: Whosoever opposes resistance to an authority, public official or his

agents or assistants in the exercise of their functions, shall be subject to a punishment of

Disobedience: The private individual who disobeys the decisions of the authorities or

public officials, the orders of the agents or their assistants ordered in the exercise of their

functions, shall be subject to a punishment of deprivation of freedom for a period of from

three months to one year or a fine of one hundred to three hundred quotas, or both.

DUE PROCESS, CUBAN PREMISE OF ACTION

Whenever we talk about criminal proceedings, specifically, it is necessary to emphasize due process, understood as a guarantor and guardian of the rights of citizens.

As detailed in the Constitution, in each case the Cuban authorities ensure compliance with all the principles that make it possible, such as:

Not to be deprived of freedom except by competent authority and for the legally established time.

To have legal assistance from the beginning of the process.

To be presumed innocent until a final sentence is passed against him.

To be treated with respect for his dignity and physical, psychological and moral integrity, and not to be the victim of violence or coercion of any kind to force him to testify.

Not to testify against himself, his spouse, common-law partner or relatives up to the fourth degree of consanguinity and second degree of affinity.

To be informed of the charges against him/her.

To be judged by a pre-established legal court and under laws prior to the crime.

To communicate with his relatives or people close to him, with immediacy, in case of being detained or arrested.

If he is a victim, to enjoy protection for the exercise of his rights.

Beyond any damage or injury occurred in the last few days, there is a greater good, said the prosecutor, which has been offended and which the State and the Cuban laws, starting with the Constitution, have the obligation to safeguard. That good is the tranquility and security of the citizens, one of the sublime conquests of the Revolution.

Within the Revolution there continues to be room for everything and everyone, except those who seek to destroy the collective project

The Magna Carta, «protects us all, but in its behalf the limits cannot be transgressed. The country has the right to defend itself from those conducts aimed at subverting the constitutional order. And the primary objective of the Penal Code remains in full force: to safeguard society, individuals, social, economic and political order, and the state regime.”