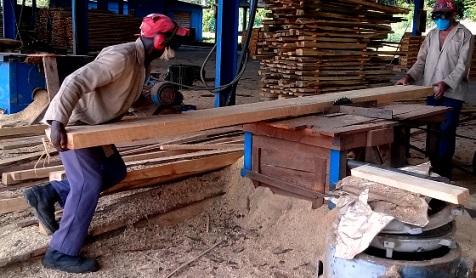 Audio: By: Camilo Gonzalez
Santiago lumberjacks resist and advance, in spite of the blockade. Those who do not recognize that the genocidal and inhumane Yankee blockade does not exist, should know that this diabolical practice is real and touches us every minute, in every way, shape and form.

As an example, the workers of the Gran Piedra Baconao agro-forestry company, who are celebrating their day on this day, produced up to the end of May sales levels of over ninety tons of charcoal for export, however, due to the siege imposed by the blockade, exports were paralyzed until last week when they were able to trade the first six containers.

Also, count the effect on those productions that did not leave on time for their destination, thus losing the quality of their productions, and add that the coal miners have had to look for alternatives to store the coal due to the lack of sacks.

As if that were not enough, the blockade does not allow the acquisition of saws for sawing in the different processes, which forces them to innovate constantly, so as not to stop production, but they also apply variants in planting, because they do not have the specific bags to make the postures in the nurseries.

Even so, the foresters of the Santiago company Gran Piedra Baconao, fulfill their commitments and their economic plans, as a salute to their day and to increase the agricultural productions in the farms.

As stated by executives of the Gran Piedra Baconao Fortestry company, it will be possible to face the challenges and overcome them.

It is true that there are problems and difficulties that have nothing to do with the vile blockade, but they are resolved as we go along, expressed the forestry workers of Santiago de Cuba, mainly from the Gran Piedra Baconao Agroforestry Company, whom I congratulate and recognize from these lines for the effort made in the midst of so many difficulties. Congratulations forestry workers on your day!

Forestry worker’s day: It was created on June 21, 1975. The celebrations for this day coincide with the first day of summer and the rainiest month in Cuba, when the seedlings are ready to be taken to the fields and their sowing in those conditions germinate in the best possible way.

When the Spaniards arrived in Cuba, it is estimated that 90 percent of its surface was covered with forests. By the year 1900 this figure had dropped to 54%, reaching its lowest value in 1959, when only 14% of Cuba was covered by forests.

Currently, as a result of an intense Reforestation Program, the forested area of the country covers approximately 24.9% of the total territory, with the westernmost of its provinces, Pinar del Río with 39.7%, being the one with the greatest forest cover. This figure represents an area of more than 450,000 hectares (1 111 974.2 a), of which a little more than 120,000 (296526.4 a) hectares are plantations.

The main endemic or natural forest species in the province of Pinar del Río are pine, Cuban mahogany and cedar, and the introduced species are eucalyptus, teak, Honduran mahogany and African mahogany.

The blockade asphyxiates and kills, just like the virus, and must end!

The blockade asphyxiates and kills, just like the virus, and must end!. Address by the minister of Foreign Affairs of Cuba, Bruno Rodriguez to present draft resolution

The UN General Assembly overwhelmingly approves the resolution «Necessity of ending the economic, commercial and financial blockade imposed by the United States of America against Cuba»