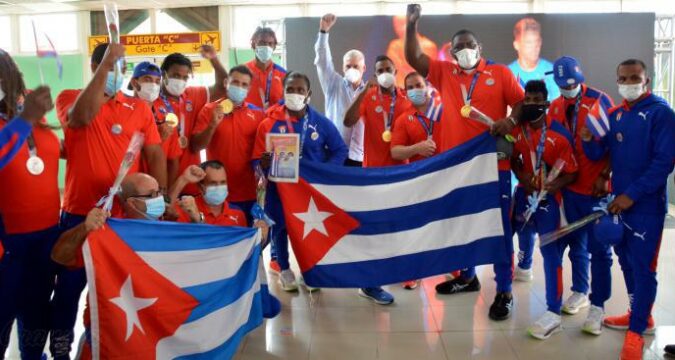 After a reception at the airport with President Diaz-Canel, the delegation traveled by bus along the capital’s main arteries, enjoying the affection and admiration of the people, proud of the athletic and human qualities of their champions.

The members of the Cuban Olympic delegation to the Tokyo-2020 Olympic Games were received yesterday afternoon at José Martí International Airport by Miguel Díaz-Canel Bermúdez, First Secretary of the Communist Party of Cuba Central Committee and President of the Republic.

«We welcome you with great gratitude and emotion given the athletic feat you accomplished in these Olympics… you all performed at the expected level, demonstrating your courage, your valor and, above all, your commitment, characteristics that made this group a delegation worthy of our people, with both your conduct and your results,» the Cuban President said.

Gold medal boxer Julio César La Cruz spoke on behalf of the athletes, saying, «We return to the homeland proud of having fulfilled our commitment to our people…. Every performance during the competition was dedicated to those who supported us from afar; they were fighting their battles here, against the U.S. blockade, which never lets up, even in the face of such a noble activity as sports.»

After the reception at the airport, the delegation traveled by bus along several of the capital’s main arteries, enjoying the affection and admiration of the people, proud of the athletic and human qualities of their champions.