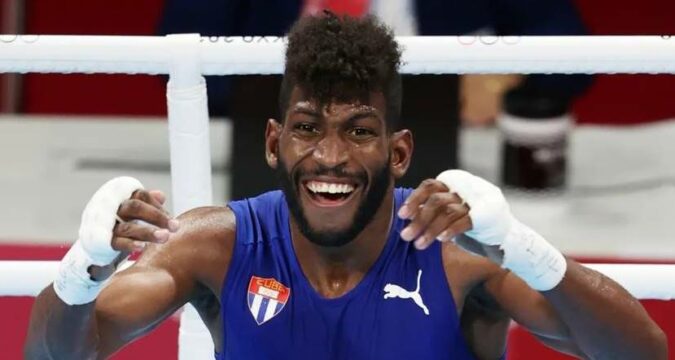 Cuban president Miguel Díaz-Canel congratulated boxer Andy Cruz (63 kilograms), who won a gold medal at the Olympic Games and praised the fighter’s bout, which closed the performance of the Caribbean nation in Tokyo 2020.

In his official Twitter account, the president highlighted the performance of the young athlete, who won in an exciting final, decided in the last round.

In this way, said Díaz-Canel, Cruz gave Cuba its seventh gold medal, ‘the fourth of the flagship’ of Cuban sport, as they consider boxing.

Also on the aforementioned social network, Prime Minister Manuel Marrero expressed his congratulations to the boxer, as well as to the entire Cuban delegation.

What a nice awakening Andy has given to all our people, once again David beats Goliath, he won the resistance, perseverance, dignity and patriotism, wrote the head of government.

The double world champion Andy Cruz was crowned on Sunday in his first Olympic Games , by defeating in the tough final bout of the 63 kilogram division American Keyshawn David, silver medalist of the world in 2019.

World champion in Hamburg 2017 and Ekaterinburg 2019, and double Pan American titleholder, the matancero achieved by 4-1 vote the twentieth victory of Cuban boxing in Tokyo, before only three defeats.

Cruz had a difficult opponent, whom he had already defeated three previous times, but this time he was much more prepared to face his opponent.

After winning the first round, the Cuban was closely outclassed in the second, but in the decisive round he was able to land the best punches and made the American’s lunges miss, so that four of the judges gave him the victory.

With his traditional dance on the ring, the 25-year-old Cuban ratified at this level that he is the best in his division in the world, with a precise, intelligent and resourceful boxing.