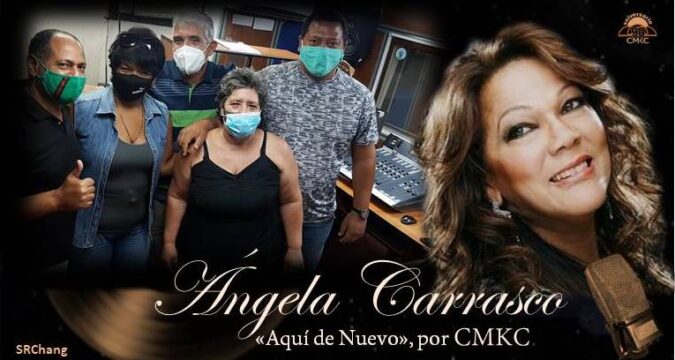 By: Santiago Romero Chang
Audio: Jorge Mora and Gonzalo González
Translation: MSc. Guillermo Rodriguez Cortes
Angela Carrasco in an exclusive interview for CMKC: The first one to be surprised was the Dominican singer, composer and actress who thought it was «a dream» to be in direct communication with her eastern Cuban fans through CMKC, Radio Revolucion.

Ms. Carrasco thanked this interview that was possible thanks to a large work team that stood as a Great Radio Family and that left a beautiful experience for the follow-up of this communication, as Angela Carrasco herself said: «I think another moment is needed, a second chapter».

The popular interpreter referred to the beginnings of her artistic career, how much influenced the choral project Jesus Christ Superstar, and friends who are now gone such as Sonia Silvestre and Johnny Ventura; also meeting with Camilo Sexto who initially confided to her that hit that he anticipated in the middle of a plane flight: «A pesar de todo te sigo queriendo». Even, the birth of his son Elvis, named after the great rock and roll star, Mr. Presley.

Thus Angela Carrasco said that she got a few awards, Gold Titles, for other songs like «Callados» and thanks to Rocío Durcal, Camilo Sexto, among other artists from Spain and Mexico.

«Every night I see the light, the little lights of Cuba».

Today, Angela Altagracia Carrasco Rodríguez dreams of bringing the show «Grandiosas» to Cuba, a nation that has always been very much mentioned in her family, because the Carrasco’s own mother sang her many Creole songs with precious lyrics and a unique sonority.

«I’m missing something in my life and that is to be able to step on Cuban soil, hopefully it won’t be too late. You don’t know the link I have with that Island», said Angela Carrasco when valuing the voices, harmony, sonority, unparalleled talent and the fact that she was born in Manzanillo, Dominican city of Montecristi, Dominican Republic, from where «every night I see the light, the little lights of Cuba», she stressed before concluding the twenty-seven minute dialogue with CMKC, Radio Revolución:

«Thanks to Joaquín Mulén, announcer; to Gonzalo González, journalist, music promoter and social communicator. To Mirelis Fonseca, announcer. Jorge Mora, Operator and Sound Specialist. And Santiago Romero Chang, webmaster, Journalist and Master in Social Communication, responsible for the web page and the channel of this prestigious station: CMKC, Radio Revolución and who made it possible for this exclusive interview to reach the world».

Before officially starting her successful musical career, Carrasco collaborated in the album Jesus Christ Superstar by Camilo Sesto released in 1975.