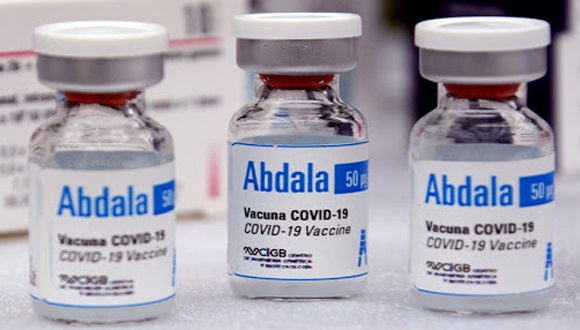 HAVANA, Cuba, Sep 18 (ACN) The Center for Genetic Engineering and Biotechnology of Cuba (CIGB) reported today via Twitter that Vietnam approved this Saturday the import and use of the Cuban anti-COVID-19 Abdala vaccine.

As highlighted by the CIGB, Vietnam will initiate the emergency use of Abdala, demonstrating that once again the peoples of both nations share their scientific-technological achievements.

«Approves #Vietnam the emergency use of our Abdala vaccine. Once again, the peoples of #Cuba and Vietnam share their scientific-technological achievements. #AbdalaUnPasoMasPorLaVida,» tweeted the Cuban institution.

In the same social network, the Group of the Biotechnological and Pharmaceutical Industries of Cuba (BioCubafarma) pointed out that the Vietnam Medicines Control Authority issued the Authorization of the Cuban immunogen based on a rigorous evaluation of the Abdala vaccine dossier.

«From a rigorous evaluation of the #Abdala vaccine dossier, the Vietnam Medicines Control Authority issued the Emergency Use Authorization of the Cuban immunogen. #CubaEsScience,» BioCubaFarma wrote.

The website of the Vietnamese Ministry of Health reviews today that the Cuban vaccine is manufactured at the AICA Laboratories Company, exported to semi-finished products and packaged at Level 2 at the Center for Genetic Engineering and Biotechnology (CIGB).

The text highlights that in Vietnam, the Center for Research and Production of Vaccines and Medical Biological Products (POLYVAC) requested the approval of this vaccine and the Ministry of Health stipulated the conditions attached to the approval of Abdala for urgent needs in the prevention and control of the COVID-19 epidemic.

Since last August, Cuba had been analyzing the transfer of technology to Vietnam for the manufacture of the Abdala anti-COVID-19 vaccine in that nation, in addition to the possibility of sending experts for the assembly of the production.

At that time, Vietnamese Prime Minister Pham Minh Chinh asked to speed up the licensing, supply and transfer of Cuban vaccine production technology against COVID-19.

Cuba is the first country in Latin America and the Caribbean to develop its own vaccines to combat COVID-19, with five candidates, three already approved for emergency use by the national regulatory authority, and has now begun the process of prequalification of its immunogens before the World Health Organization (WHO).

The information was announced in a meeting held September 2 between BioCubaFarma’s president, Dr. Eduardo Martínez Díaz, and the PAHO/WHO representative in Cuba, Dr. José Moya, who described the meeting as cordial, welcoming the interest expressed by our country to begin the prequalification of its vaccines, and noted that international media reports citing an alleged WHO disqualification of Cuban drugs are based on the manipulation of statements made by one of the organization’s officials.

A recent CNN report alleged that the Cuban government did not receive an emergency use license for its vaccine against COVID-19 from the WHO and, therefore, it cannot be purchased through the PAHO Revolving Fund.

BioCubaFarma, responded on its Twitter account, stating, «Once again information is manipulated to affect Cuba and its image.

«This is false information, our vaccine has already been authorized for emergency use by Cecmed, a regulatory authority of reference in the region and recognized by the WHO itself,» the post continued.

«The process for its recognition by the WHO has not yet begun, so it is impossible that an evaluation has been issued. Considering the respect which WHO/PAHO deserves, its history of cooperation with Cuba and the many lives that Abdala can save, let the truth be told,» BioCubaFarma insisted.