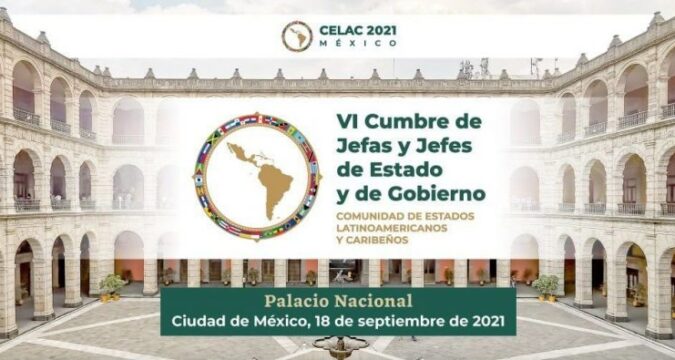 Mexico, Sep 18 (Prensa Latina) The 6th Summit of the Community of Latin American and Caribbean States (CELAC) inaugurated in Mexico addresses a broad agenda including the 2021-22 action plan.

In a general sense, dignitaries should examine the regional economic reactivation, how it will be fostered, and the relationship with extra-regional partners within an international cooperation program of partners beyond their continental borders.

In this way, they will seek to strengthen activities within the framework of the so-called CELAC-China Forum, and of the European Union and other areas of interest previously defined with the region, in addition to rapprochement with the African Union, the Association of Southeast Asian Nations and ongoing dialogue and cooperation with India.

Another important topic is related to the environment and climate change in order to try to promote a perspective of impact in both aspects and develop a sustainable management of ocean resources.

Progress made in equality, gender and diversity within the promotion of a gender perspective and protection of the vulnerable population will also be examined, according to the documents approved at the meeting of foreign ministers prior to the summit.

Another aspect is related to innovation where the commitment is to promote scientific-technological development with a focus on the region, and in the same way the Latin American and Caribbean integration that CELAC must promote in all its actions.

CELAC is a mechanism for dialogue and regional political coordination

The most difficult issue, which was related to the future of the OAS, has lost steam and would be reduced to proposing the creation of a reflection group on its future only if the issue is put on the table, since a discussion about it is on the agenda at least in writing, according to reports.