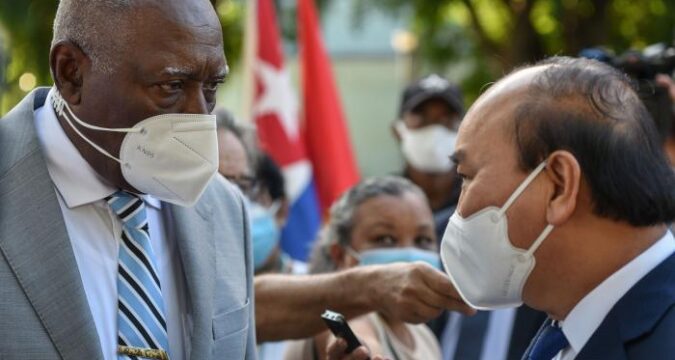 HAVANA, Cuba, Sep 19 (ACN) The Center for Genetic Engineering and Biotechnology (CIGB) and the Center for Research and Production of Vaccines and Medical Biological Products (POLYVAC) of Vietnam signed this Saturday in this capital a memorandum of understanding for scientific and technical collaboration.

The signing took place as part of the broad work agenda of a delegation from the Asian nation headed by the President of the Socialist Republic of Vietnam and member of the Political Bureau of the Central Committee of the Communist Party of that country, Nguyen Xuan Phuc, who arrived in Havana today.

In announcing the news on Twitter, the CIGB described the signing as a success.

It was also announced today that Vietnam’s regulatory authority authorized the emergency use of the Cuban anti-COVID-19 Abdala vaccine (developed by the CIGB), which will be imported precisely by POLYVAC. POLYVAC will be the importer.

Video: Cuba and Vietnam will collaborate in scientific research

According to what Miladys Limonta, coordinator of CIGB’s vaccine candidates, told ACN, other biotechnological products are also used in the Asian nation, such as the vaccine against Hepatitis-B, the immunogen against hemophilus influenzae and Heberprot P, the latter being highly effective in the treatment of diabetic foot ulcer.

At present, Vietnam is Cuba’s second largest trading partner in the Asia-Oceania region, as well as the main investor in the area and the largest supplier of rice.

During the stay of the President of that Asian nation in the Caribbean island, there will be exchanges on business opportunities of the Mariel Special Development Zone and a tour of the Center for Genetic Engineering and Biotechnology.

President of Vietnam arrives in Cuba on official visit