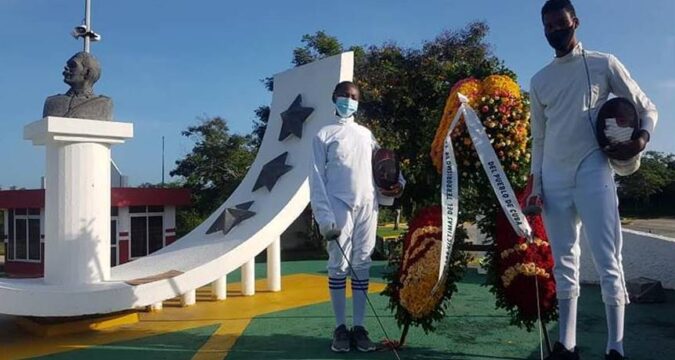 The president pointed out that the masterminds died peacefully, protected by U.S. Republican and Democratic administrations on end.

«On the Day of the Victims of State Terrorism, Cuba honors the more than 3,400 people who have died to U.S. aggression, a pain we harbor as they keep trying to stain history by adding our country to the infamous list of states sponsors of terrorism,» he added.

Prime Minister Manuel Marrero Cruz also posted a message, calling the crime one of the worst and most abominable acts of State terrorism carried out against the Cuban people.

Minister of Foreign Affairs Bruno Rodríguez Parrilla, who also recalled the date, wrote that it is impossible to forget, on State Terrorism Victims’ Day, the atrocious crime of Barbados that took the lives of 73 innocent people.

The National Assembly of People’s Power also stated on Twitter that “Cuba remembers the horrendous crime of Barbados, the brutal act of terrorism perpetrated against a civilian plane in mid-flight with 73 people on board, including 57 Cubans.»

The culpability of the CIA in the crime against the Cuban airliner in Barbados is the object of repeated accusations by a Cuban expert on the role of the U.S. Central Intelligence Agency in the sabotage that took the lives of 73 people 45 years ago. (ACN)

“I will never stop writing about this horrendous event that still fills us with sadness and outrage, nor will I stop denouncing the CIA as one of the main perpetrators,” warns Manuel Hevia Frasquieri, Director of the Center for Historical Research of the Cuban State Security.

In an extensive article published in the digital site of the Ministry of the Interior, the author recalls Commander in Chief Fidel Castro’s speech on October 15, 1976 during the memorial service at the Revolution Square, as he made known to the world the text of a secret message from the CIA, addressed to one of its mercenaries in Cuba, three days after the attack, asking him:

«What is the official and particular reaction on bomb attacks against Cuban offices abroad? What are they going to do to avoid and prevent them? Who is suspected of being responsible?”

In light of these questions, Hevia Frasquieri continues, Fidel wondered why the CIA wanted to know what measures would be taken to avoid and prevent terrorist acts.

«At first we had doubts whether the CIA had directly organized the sabotage or carefully planned it through its cover organizations of Cuban counterrevolutionaries, but now we are convinced of the Agency’s direct involvement in the blowing up of the Cubana airliner in Barbados,» he added. “(Fidel) was absolutely right, since the crime dovetailed perfectly into a string of events in that tragic year marked with many terrorist attacks against Cuba abroad by CIA-hired mercenaries.”

Years later, it became known that in June 1976 the main U.S.-based anti-Cuban terrorist organizations were summoned to the city of Bonao, in the Dominican Republic, to step up international terrorism against Cuba.

“A new grouping called Coordination of United Revolutionary Organizations (CORU) integrated the traditional fascist groups, some directed by the CIA itself, among which were Acción Cubana, Brigada 2506, Frente Liberación Cubano, Alpha 66, Abdala and Movimiento Nacionalista Cubano,” the author points out. “Their leader was the terrorist Orlando Bosch Ávila, whereas CORU would be the visible head.”

The details of this meeting were known to the FBI and the CIA, whose undercover agents were present. Months before the Barbados crime, they learned of the intentions of these terrorist groups to blow up a Cuban plane in mid-flight.

Several authors agree that that meeting was a CIA maneuver to remove from U.S. territory the actions of those more aggressive groups that had created serious instability and organized terrorist acts that had also killed U.S. citizens and damaged American property.

As a veteran officer of the Miami Police Anti-Terrorist Division stated years later, «…the Cubans organized CORU at the request of the CIA… the United States supported the meeting to get them all focused on a common purpose and under control of the United States. The basic signal was, go ahead and do what you want, outside of the U.S. territory…»

In January 1975 an explosion had killed four and injured two people in Puerto Rico. A month later, a bomb was defused in the offices of the Colombian airline in San Juan, and in March, two devices detonated in a tourist office in Panama that sold tickets to Cuba, as well as in the Costa Rican consulate in Los Angeles, California.

In May and July two bombs exploded at the Venezuelan and Costa Rican embassies in Washington, D.C., and in July a Puerto Rican ship was sabotaged in San Juan.

In October two other bombs exploded in Miami, whereas on December 29 another device was detonated in the baggage hall of the Dominican airline at La Guardia airport in New York, causing 13 deaths and 75 wounded, a terrorist act without precedent in recent years in that country.

After the Bonao meeting, the FBI and the CIA learned from their agents that Orlando Bosch had met with other Cuban terrorists and told them he was willing to do «something more» against Cuba. That’s when they decided to finish off Orlando Letelier, former minister of the Chilean Popular Unity government, assassinated in the middle of the street on September 26, 1976 in the city of Washington by Cuban terrorists and agents of the Chilean DINA of dictator Augusto Pinochet.

According to declassified documents, terrorist and CIA agent Luis Posada Carriles commented on another occasion that «they would shoot down a Cuban plane” and that «Bosch had the details». This conversation took place just a few days before the horrendous crime without the CIA or the FBI doing anything to keep track of and prevent such a monstrous act.