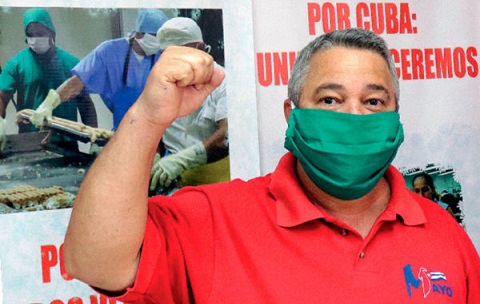 The following is a statement issued by the Cuban Trade Unions:
Fidel once said that someday a gigantic monument should be raised to that unsurpassable hero that is the people. And the fact is that we Cuban workers have been able to overcome such powerful obstacles as an intensified economic, commercial and financial blockade, and in recent times a pandemic that has put the entire planet in crisis.

Many are surprised that a small and beleaguered nation has been able to maintain the vitality of its economy, to preserve its labor and social achievements and, with the valuable contribution of its scientists and a universal, free and quality health system, to contain the effects of a cruel disease until recently unknown.

The reasons lie in our daily efforts as men and women who day by day, in factories, workshops, fields, hospitals, schools, scientific centers and from the most humble job, strive to build this country, aware that in a socialist society like ours every step carries the will of a State established by all and for the good of all.

As the efforts of the workers make it possible for us to take the path to recovery, internal political operators, led and encouraged from abroad, announce their intention to carry out a march that they have portrayed as peaceful and lawful, invoking the Constitution.

According to the articles of the Magna Carta itself, the peaceful exercise contemplates not to attempt against others, nor to violate the peace of the citizenry or stimulate the reversion of the established order. No lawful action can harm other people’s rights or hinder collective security, general welfare and public order, and it must always be carried out with respect for the Constitution and the laws.

In this case, their poorly disguised objectives are to provoke a change in the political system in Cuba and a return to capitalism. And this is demonstrated by the determined support through an avalanche of messages on social networks, from elements that call from abroad for a U.S. military intervention, from notorious terrorists, from members of the counterrevolution in Florida and even from the remnants of the defeated mercenary brigade 2506.

We Cuban workers are united around our organization and trade unions and advancing in the construction of the new society and in the updating of the economic model to build a better country. As such, we strongly reject those who promote destabilizing acts. We are convinced that no provocation will succeed in demoralizing or intimidating those of us who fight for the present and the future of the nation.

The trade union movement will fight for the achievement of the efficiency of the socialist state enterprise, for the workers of the private and cooperative sectors to be increasingly important actors in the national economic framework and for each of the measures aimed at making our socialist social project prosperous and sustainable to be successful.

Cuban trade unionism will mobilize together with all the people against those who are determined to take away our independence and sovereignty and the conquests achieved with collective sacrifice.

Against the destabilization purposes they want to impose on us from a media matrix, Cuban workers and the trade union movement will wield our most powerful weapons: unity and patriotism.
Long live the Cuban Revolution!