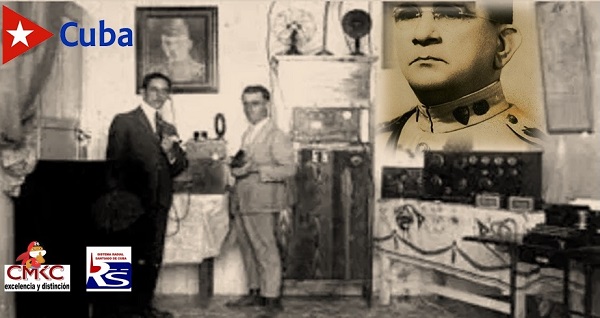 Author: Santiago Romero Chang
Luis Casas Romero, Favorite Son of Camagüey where he was born on May 24th, 1882, died in Havana on October 30th, 1950.

In 1891 Luis Casas Romero began his music studies with the Spanish maestro Gregorio Canova. In 1893 he joined the orchestra of the Sociedad Popular Santa Cecilia, and in 1901, the Patronato de la Banda de Musica Infantil. In 1904 he moved to Havana, where he served as flautist and orchestra director of the Marti Theater. In 1907 he settled permanently in Havana, where he worked as a flutist in the orchestra of the Alhambra Theater, conducted by Jorge Anckermann.

In 1913 Luis Casas Romero joined the army of the Republic as flautist of the Band of the General Staff of the Columbia Camp; in 1918 he became deputy director of the band and was appointed director, a position he held until his death. In 1918 he founded the first electromechanical factory of pianola rolls, in which Ernesto Lecuona, Moises Simons, Jaime Prats, Nilo Menéndez and Vicente Lanz collaborated; he named the perforation method autograph roll.

Casas Romero also stood out for being the founder of radio in Cuba, when on August 22, 1922 he began experimental broadcasts with his 2LC radio. On December 16, 1933 he inaugurated Radio COC, the first short wave radio station in Cuba, Luis Casas also founded CMCK and was artistic director of CMC of the Cuban Telephone Company.

With his band he traveled through the Dominican Republic, Canada, the United States and Mexico. Luis Casas Romero is another valuable name among the range of Cuban folklorists; his inventiveness goes hand in hand with his technique in a hundred productions, all of them overflowing with the cleanest Cuban flavor. Casas Romero, besides cultivating the typical genres of the Cuban songbook, knew how to enrich this heritage by creating a new one, the criolla (Creole), which is immediately associated with the title of Carmela, the first one he composed within that modality.

In the historiography of Cuban radio broadcasting is proudly inscribed the wonderful invention of the pioneer station, the 2LC, by the remarkable flutist, composer, creator of the criolla, band director and graduate of the Liberator Army Luis Casas Romero.

It was August 22, 1922. Shortly before nine o’clock at night, the 2LC opened its signal with a clarion call given by a toy cornet, followed by taps on the metal of the instrument (similar to the ticking of the clock), and then the nine o’clock cannon shot was heard from La Cabaña.  Afterwards, Casas Romeo offered in his voice the weather forecast: «Good weather tonight… Earthly temperatures and breezes».

Thus it was born the first newscast of our radio: only with the time and the state of the weather; then were added the results of sports held in Havana and musical numbers presented by Zoila, daughter of Casa Romero. In addition, she was the first narrator of children’s stories on the radio (the first one was Pinocchio).

Camagüey-born Luis Casas Romero was a music stand musician, band director, virtuoso flutist and one of Cuba’s most prolific composers.

His parents were the tobacco grower Luis Casas Puga and Adelina Romero García, also from Camagüey and of humble background.  There were no musicians in his family until his birth.  It is said that when he was four years old he was given an accordion, his favorite toy, with which he soon played all the most popular songs of the time.  At the age of nine he began music theory classes and before he was eleven years old, he was already playing the flute in the parties of the Pious Schools of Camagüey, as well as in dances and theaters.

He interrupted his artistic career to join the Liberator Army, under the command of General Lope Recio Loynaz, where he was appointed cornet of order.  At the end of the war of 1895, he returned home with a deep wound in his right leg.  In 1901, his father died and he was left as head of the family: his mother, three brothers and an aunt.

During those years he worked as a typographer, typesetter and proofreader for the newspaper Las Dos Repúblicas, while he wrote music reviews for two newspapers, gave music lessons, played the flute at dances and parties, and studied in the evenings.

He also founded and directed the Children’s Music Band of Camagüey, and he authored pieces of great popularity such as the Mambi and Simbolo, which became an sports march.

In Camagüey he married for the first time, on April 17, 1902, with Rosalía Hernández, and in Havana he married for the second time with María Esther Lamelo.  From his first marriage he had six children, one of them was Zoila, considered the first woman to work as an announcer in Cuba and possibly in Latin America.

As a director he worked in several theaters in Havana and for a long period of time he saw his fame grow as a flautist of the Marti Theater and Italian opera companies that performed in Cuba.  He cultivated all musical genres and composed twenty-three zarzuelas, claves guajiras, guarachas, overtures and military marches, totaling some five hundred scores.  He worked for thirty years in the direction of the Music Band of the Army General Staff, for which he composed innumerable works.