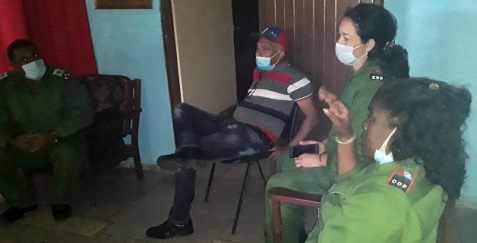 Vice president of the Provincial Defense council, Beatriz Johnson, accompanied by several members of the council, visited the municipality Songo-La Maya, and in the Yerba de guinea village they checked the damages caused by tropical storm Laura: six houses lost their roofs.

According to a release report around 300 asbestos planks were sent to the municipality to solve this situation in the shortest time possible.

The place is also without electrical power due to transformer failures and posts on the ground because of the strong winds that blew on Sunday night.

Members of the Provincial Defense Council urged the people there to work promptly to recover the crops, especially those of short cycles, and to save all productions that are ready for human consumption and distribution.

Vivian Torreblanca, vice president of the Municipal Defense Council, highlighted that luckily important places for the socio economic life of the people, like schools, grocery stores, department stores and others were not affected by the storm.